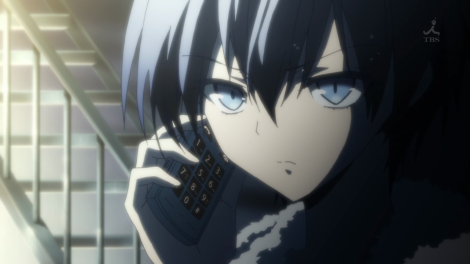 Hell, yeah. My most anticipated series of the season did not disappoint. If you’re shallow like me, then anime girls who are assassins might just be enough to entice you to watch Akuma no Riddle. However, if you want something more substantial then I believe you’re in luck as well because Akuma no Riddle boasts a great ensemble of characters as well as a promising story.

The series focuses on an assassin prodigy named Tokaku Azuma (CV: Ayaka Suwa) who’s sent to a private all-girls academy to assassinate one of the students there. In a class of 13 girls, 11 others are also assassins of varying levels and 1 is the poor target. Due to her completely un-threatening  demeanor, all eyes are on Haru Ichinose (CV: Hisako Kanemoto). As luck would have it, Haru and Tokaku are roommates but can Tokaku bring herself to kill her? 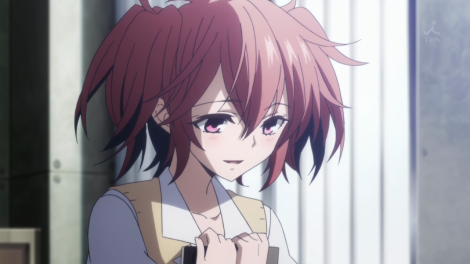 As you might be able to tell from the series title and the way episode names are done, there seems to be a lot in the way of moral ambiguity. When Tokaku is asked to complete the sentence: “The world is filled with __” , she responds with “curses,” while Haru answers with “forgiveness.” Haru’s answer brings up a flashback of Tokaku’s childhood where she presumably killed someone and now regrets it. Watching the episode, one might notice the extensive use of shower scenes for Tokaku. I think it represents some past guilt she holds (proverbial blood on the hands) that she wants to wash off of her.

Since this is a shoujo-ai series, I’m really interested to see how the romance will begin between the two main characters, especially since they are such complete polar opposites. Of course, this polarity makes them a good fit for each romantically in my opinion. Haru is almost sickeningly cute and optimistic to counteract Tokaku’s melancholic stoicism, as well as the dark and twisted atmosphere given off by the rest of the characters. In this way, it really does feel like it’s Haru versus the world (except for the 2 funny male characters). 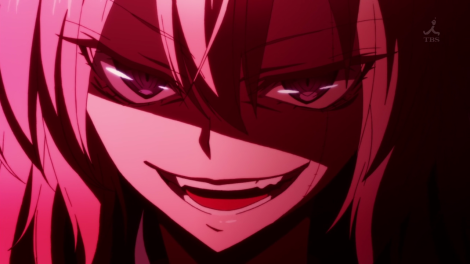 I also want to point out the great facial expressions in this series, as they range from Haru’s delightfully innocent smile to Tokaku’s constant (yet varying) grimaces to a variety of insane expressions from the other characters. The strong characters are definitely the greatest draw of Akuma no Riddle, and the fact that each episode will have a different ending featuring a different character is further proof of this.

I’m greatly enjoying Akuma no Riddle already, and I hope you all will consider following this one to the end. Watch this if you like assassins, unconventional love stories, and…spandex? Seriously, the assassin outfits in the OP were pretty awesome.

“How does ‘The world is filled with forgiveness‘ sound?” ~ Haru Ichinose