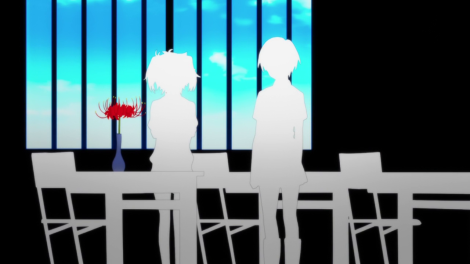 You know, I promised myself that I wouldn’t fall behind (too much) on impressions this season, especially since I’m only writing about one series. Well, the end of this semester kind of handed my ass to me a little so this was to be expected I guess. Anyways, continuing with the trend set by the last episode, episode 4 brings us another character to the forefront of attention, Kouko Kaminaga (CV: Haruka Yoshimura).

Compared to last week’s psycho serial killer, we have a girl who’s on the opposite side of the spectrum. Kouko grew up in an orphanage (a Christian one at that) and was raised to be an assassin. Despite excelling academically, her skills as an assassin were incredibly lacking and it seems like she never got good at the job all the way up to her enrollment to the academy. Every time she failed as a kid, Kouko’s mentor would tell her that it’s better to not be good at this sort of thing, which I guess is a little cliche but still kind of powerful. Here, we’re introduced to someone who has no desire to kill or desire to be in the Black Class.

Well, I shouldn’t say “no desire” because she does initiate her intent to kill Haru, and eventually reveals that the only reason she does this is just so she doesn’t have to be burdened by the responsibility of being an assassin anymore. This must be incredibly hard for Kouko because she’s not only inept but she killed her mentor because of it. It’s honestly really emotional watching her fight helplessly against Tokaku. And then the shot of her top test score on the desk got to me surprisingly. It makes me wish that the series was longer because these characters deserve more development time. There are complex personalities and backstories that could be explored, but instead we’re constrained to the one character per episode trend.

I also want to bring up something that happened during Tokaku’s fight with Kouko, which is Tokaku’s reaction to Kouko’s bomb trap. Normally, when a character gets blown up by a bomb they’ll just get blown back with little harm at all. Here we see Tokaku diving to protect Haru while covering her ears. Yes, explosions make sound and cause  damage to our body. Sure, I doubt this is the most realistic recreation of a bomb you’ve seen but it’s nice to see little details being accounted for sometimes.

Also, the answer to the title’s riddle? Death.

“Death is not the end of life, but the completion of a life.” ~ Kouko Kaminaga