This week’s riddle kind of threw me for a loop a little. Well, I guess it becomes a little more obvious when Haruki asks Tokaku if she helped to help her “free” Haru from her cage, hinting that the answer to the riddle is death…again. They never said that there’s only one correct answer to these, and I kind of don’t expect there to be, but death seems to fit the bill most of the time. I also wasn’t expecting Haruki to go home so soon, especially since she’s such a likable character. But then again, that also gives more reason for her to be sent home.

As we learned from Kouko last week, not all the girls in Class Black are bad and Haruki reminds us again this week. Despite her seemingly self-centered demeanor, we learn that Haruki is actually quite a caring person. The reward she wishes for is a happy life for her family. Even her wanting to kill Haru isn’t completely malicious because she honestly believes that dying is better than Haru living with survivor’s guilt.

In addition to Haruki’s backstory, we get a little bit more insight into Tokaku’s past where we see her practicing to be an assassin. Her aunt (who is admittedly very good-looking) shows concern for this way for Tokaku but the grandmother immediately berates her, saying that she has no say in the matter because she’s from the branch family. For both Haruki and Tokaku, family matters bred two assassins but for two completely different reasons. Haruki kills to provide for her family but Tokaku is an assassin because it’s an obligation to her. However, the fact that Tokaku has yet to kill anyone brings this sense of duty into question. 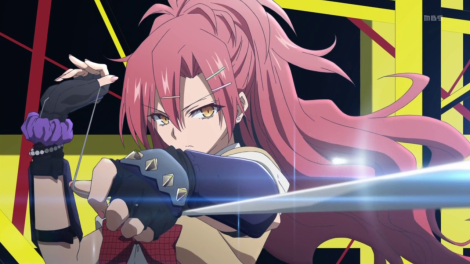 Haruki’s love for her family is so strong that she would even take herself out of the equation if it meant that they were taken care of. As was the case with the last two girls though, Haruki fails to kill Haru but manages to leave the academy alive. I really wish we could have seen more of her, especially her interactions with Isuke!

“Say, Azuma. Wouldn’t you like to give Haru-chan her freedom?” ~ Haruki Sagae