7th Riddle – “What Can Never Be Caught Up To?

I really really enjoyed this episode, which was an unexpected outcome for me because prior to this episode we knew nothing about Suzu Shutou. As much as I have complained about the shortness of this series, this might be the first time in which I felt okay with the pace of the episode. Sure, I would have liked more exposure time for Suzu, but I think we were able to get a good grasp of her character without having things drag out. We learn that unlike the others, she’s not someone who knows how to fight one on one. And unlike Kouko, she doesn’t try to recklessly dive into combat she knows she cannot win and challenges Haru to a game of wits.

The only really strange thing to me is how she was able to get the explosive necklace onto Haru in the first place, without Tokaku noticing. Regardless, they’re both given the modest time limit of removing the collar by midnight before Suzu forfeits. She even gives them clues in the form of playing cards, each with a different number for the code that unlocks the collar.

With some occasional help from the others, like Sumireko’s assault rifle, Tokaku finds three of the cards. The last one is hidden in a card key that’s required to free Tokaku when she gets trapped in a water cage. She urges Haru not to use it, but Haru makes the conscious decision to place Tokaku’s life over her own (not before sharing a kiss underwater). Thanks to some inferences from Suzu’s backstory, Haru deduces that the password is 0715, which is the birthday of Suzu’s first love. 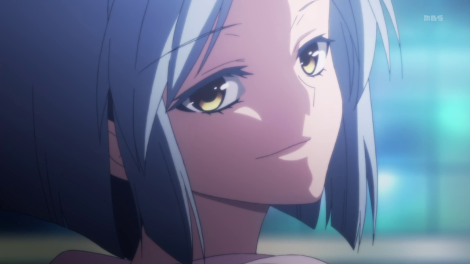 It turns out that Suzu’s wish is to find a way to age normally and die. Due to her rare case of Highlander’s Syndrome, her body doesn’t age. When asked how old she really is, she simply responds with a mysterious and chilling, “Who knows? I forgot.” Judging by the period fashion, people have speculated that she’s actually over 100 years old. Despite being one of the more tame episodes, I’d have to say that this is probably my favorite so far. The way each element of the episode wraps together at the end, from the teacher’s interference to Nio’s watermelon, feels very much like a mystery and I love mysteries. I should also mention that I really like Suzu’s voice, voiced by Anzai Chika.

“The day has come once again, huh?” ~ Suzu Shutou