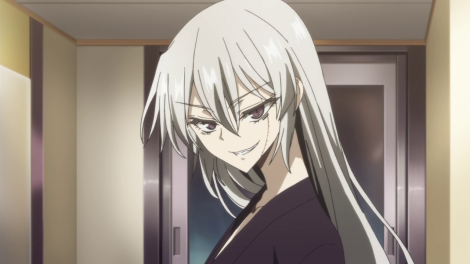 8th Riddle – “Which Gatekeeper is the One Who Lies?”

Changing up the pace a little, we have TWO simultaneous attempts on Haru’s life this episode. Unlike with the Romeo and Juliet play, those didn’t really try to kill Haru that much. This time, we have a two-pronged attack by Isuke and Shinya (Mahiru’s dark side), and these two characters might just be my favorites. It’s really hard to decide since the cast as a whole is so strong, but these definitely rank pretty high and it’s pretty cool to see the two in action at the same time.

We learn a little bit more about Isuke’s family this episode, discovering that her biological parents were killed by her new “mom,” an assassin by the name of Eisuke Inukai from which she got her masculine name. While this sounds horrible, it turns out that her real parents neglected her to the verge of death, and Eisuke intervened but was unable to save her brother. After taking her in, Eisuke trained her to be a professional assassin like himself and this is all unbeknownst to his gay partner. I guess homosexuality runs in the family? Sorry, I just really kind of ship Isuke and Haruki.

Even though Isuke’s wish is for money, she decides to place her priority on killing Tokaku. Oh, speaking of Haruki, Isuke’s wish is more or less identical to hers as she also wishes for money so that her family can live comfortably. I assume this also means that she wishes to end Eisuke’s, and maybe her own, life as an assassin by doing so. It’s interesting that she tells Haruki to forget about her family when she’s essentially in the same boat.

Isuke takes advantage of Tokaku, knowing that she’s not attacking to kill, and puts her on the defense. Shinya jumps into the fray with what is probably the coolest declaration of attack in the series: by hammering the note through a door. Where will this split battle take us? Well, I’ve already watched the next episode, it’s just a matter of actually writing about it. How did I use to do four of these a week?