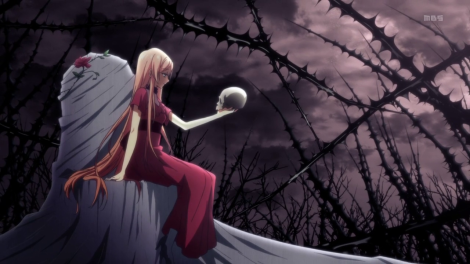 This is a huge episode and probably the best thus far. So much happens in terms of plot and action, surpassing all expectations for an episode featuring the final boss of sorts of Akuma no Riddle: Sumireko Hanabusa. From the beginning, I had a feeling that she would be saved for last (excluding Nio because she’s just the arbitrator). The question was what type of ability she would have. Despite (or perhaps because of) her fragile appearance, it was easy to suspect that there would be something ridiculous happen.

Though, I didn’t expect Sumireko to be a Terminator clone. It turns out that she is in a similar boat to Haru, a constant target for assassination due to her father’s powerful CEO position. Having lost her limbs in an assassination attempt, her body was reconstructed into the ridiculous bunch of machinery that we see. To make things even crazier, Otoya comes out of nowhere (okay, well we see her break out of jail) to join the party. Literally, it’s a tea party with puppet versions of everyone except Otoya, who’s tied up at the table. I don’t know why, that scene was creepy but hilarious to me. 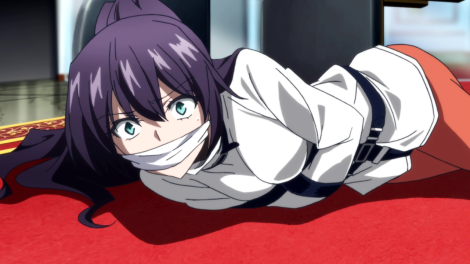 It was great seeing Otoya again after so long. Even though she’s the most insane of the assassins, I think that makes her quite likable too (like Shinya). Her sadistic love for Haru is almost cute. Unfortunately, her scissors are no match for super Sumireko and is eventually taken away by Nio, who she’s still terrified of. In talking about the similarities between herself and Haru, Sumireko brings up worker bees and rabbits and says that they both do what they can for their leader.

What I really like about this series is that a lot of care goes into the subtle themes. In this episode alone, we have the puppets and Sumireko’s ED which talks about mechanization and being controlled, which I think says a lot about fate and free will for both her and Haru. Even though some things logically don’t make sense, like how Haru can fire a rocket launcher or how Tokaku can survive a chadelier being thrown at her, I think it’s more important to look at the greater picture and how the character’s have been constructed. 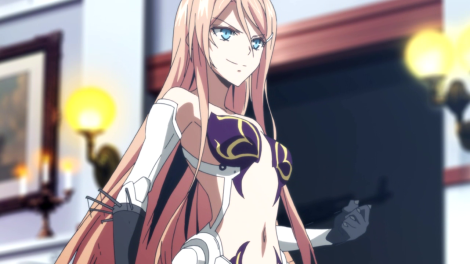 Oh yeah, let me just take a minute to say how bad I feel for Mizorogi-sensei. He honestly does his best for his kids, but due to the game his students keep disappearing one by one. Seeing him slowing lose confidence might be the saddest thing about this series so far.

“What do the worker bee and the rabbit have in common?” ~Sumireko Hanabusa

One response to “Impression – Akuma no Riddle, Episode 10”