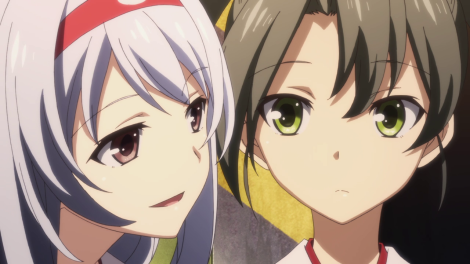 I know I’ve never been one to talk about shipping, but seeing as how ships are involved, I can’t help but discuss the ship shipping. The KanColle anime is really pushing the Zuikaku and Kaga ship, and while I figured that it might, given the animosity that is inherently between the two in the in-game lines, I didn’t think it would be an entire plot point. Since many popular ships are born out of characters disliking each other (Nisekoi is founded upon this mechanic), it’s not surprising that Zuikaga is such a popular ship now, and I actually find it kind of cute too.

Sure, the Akagi and Kaga pairing is what feels more natural and pure, especially considering that it’s the reticent Kaga who is displaying affections in this one, but the chemistry between Kaga and Zuikaku is much more dynamic. Maybe that’s just because Akagi has little besides food on her mind at all times. Besides, how cute is it that Zuikaku is enamored with the little towel rabbits? I can empathize with her because I also find the rabbits to be incredibly cute, and I want Kaga to teach me how to make them, too. I guess I can be grateful that thanks to the anime, we can expect more cute fanart of Kaga and rabbits.

But enough of that cutesy stuff because this episode violently thrusts us back into the action, and things get surprisingly tense as Fubuki leads Force Five in another operation. However, things don’t go as smoothly as they did last time because it seems that the enemy as hacked the Naval District’s code, granting them complete intelligence on their plans and their whereabouts at all times. This almost gets Zuikaku killed, if it weren’t for some quick thinking on Kaga’s part. Luckily, this act of self-sacrifice doesn’t go wasted as Zuikaku finds the courage within herself to think on her feet and save Shoukaku.

Out of all the Abyssal ships, I’d have to say the Wo-class carriers are my favorites. They’re a pain in the ass in the game because of the aerial advantage that they grant the enemy fleets, but they have the coolest designs. I just really like the head crabs that they have, as well as their cute hairstyle. I kind of felt bad when the gold one is getting beat up, but they are indeed evil beings, and the she’s almost successful in killing Zuikaku and Shoukaku. Fubuki and the others do end up saving the day, but the gold Wo-class carrier gets away, and I’m sure that’s not the last time we’ve seen her.

Also, their admiral is kind of not very good. Not only does he have no face or body, but he doesn’t even know how to stock up on instant-repair buckets. He also lets Inazuma and the others use instant-construction torches to light up their pot. Honestly, Akagi and Kaga need to find better things to do while being in repairs aside from cat’s cradle and making towel rabbits. Next time, it’s time for the big Yamato herself to make an appearance. I’ve been playing this game for over a year, and I still don’t have her. Maybe I can build her before next week… Tenryuu got mentioned in the episode, too! So that at least means she exists in this universe, but I highly doubt we’ll see her appear. A man can still dream, though…

“I simply bet on the small hope I saw, in that desperate situation, and I won.” ~ Kaga