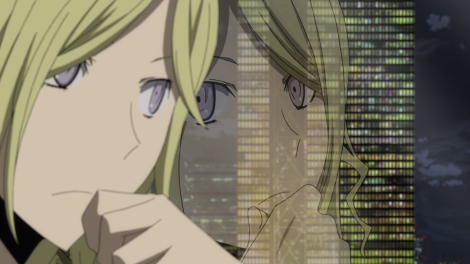 I’ll be honest, it’s hard to concentrate on anything now that Vorona’s in the picture now. Where Ruri acts as a parallel character for Celty in the supernatural apparition department, Vorona challenges her on the streets in the motorcycling department and does so with actual significance, unlike a certain traffic officer who shows up for half of a scene. To be fair though, I would like to see more of Officer Kuzuhara, just because he’s so mysteriously random. How cool would it be to have a three way motorcycle showdown between Celty, Kuzuhara, and Vorona?

While travelling around with a man who gets too worked over everything, Vorona carries out assassination jobs, but this time she’s ordered by Jinnai Yodogiri, in the name of the organization Awakusu Kai, to kidnap the little taser-loving Akane, as well as to get rid of anybody who gets in the way. However, Vorona doesn’t know Celty’s true powers and ends up decapitating an already headless rider. Despite surviving the attack, Celty is quite shaken up by the attempt on her life. For someone who has the ability to regenerate her body, I think that says a lot about Vorona’s skills.

Vorona spends her free time reading physics and mathematics textbooks and answering all of Slon’s many important inquiries about life, like why do men have nipples? Next episode, it seems that we’ll get a look at Vorona’s past and figure out how a young girl becomes such a fearsome assassin in such short time. And what of Aoba and the Dollars? It seems that Izaya believes that a big disaster with the Dollars is on the horizon, but of course it could all be his doing too. Despite being the creator of the Dollars, Mikado has been helpless in trying to control every single member. Will the group simply dissolve deeper into anarchy? And who in the world is knocking down Anri’s door?!

“Before I knew it, I’d taken a step from ‘normal’ to ‘abnormal’.” ~ Celty Sturluson