Oh boy, where do I even begin with this? Last season, a major criticism this series received was that it was too reserved in its adaptation of the manga, leaving out instances of gore and rape. In what may or may not be a response to said criticism, the anime portrays the scene in which we meet Tyuule for the first time in an arguably more graphic, brutal manner than in the manga, and I hate that I have to open up my thoughts about this new season of GATE with this revolting topic, but it’s something that has almost literally ruined my mind for the past week. When I’m at work, this scene will sometimes float into my head, and I’ll just get immediately upset, for a number of reasons.

The main reason is obviously because watching a woman being raped is nauseating, especially when Tyuule is a warrior chief and will be relevant to the plot later. So this isn’t just a random character being tortured that we can simply brush off the same way we do when other nameless characters are killed or meet worse fates. This is largely anger directed towards Zolzal, the character. 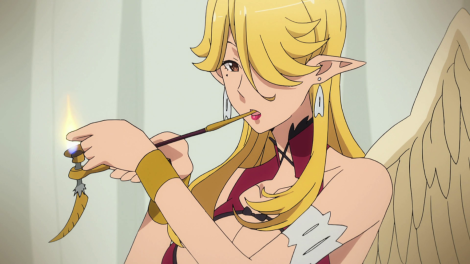 The second reason this scene infuriates me is that rape as a plot element is such a cheap, thoughtless method to incite an emotional reaction out of the viewer. This is anger directed towards the writer and to anyone who thinks the story and the world of GATE is anyway enhanced by this scene and this character’s circumstances.

I don’t care if it’s realistic to acknowledge the fact that corrupt men with power will use it to dominate women because not only is that a tragic truth, it makes me sick, and quite frankly, I don’t watch anime because I want realism. I don’t need adult elements like gore, adultery, and rape added to a story in order to validate myself, my age, or my taste in media. Doing so only cheapens the gravity of those elements, reducing them to simple badges that one wears into the “I like mature things, and that makes me cool” club.

Watching things with gore and rape doesn’t make you cool; in fact, needing that psychological reaffirmation is, in reality, quite uncool. The careless addition of these elements can make a story feel weak and hollow, in that it foregoes thoughtful scenarios, relying on narrative components that lack and prohibit meaningful depth.

“That night, the capital was hit by an earthquake.” ~ Lelei la Lalena