Episode 02 – “Without Dissent, Without Shame, Without Resentment”

The good times roll in episode 2 of KanColle. Incidentally, Fubuki does a lot of rolling around this episode as well, as she tries to get up to be speed with the rest of the 3rd Torpedo Squadron and live up to her name as a Special Type Destroyer. As an aside, Special Type Destroyers, like Fubuki-class ships, historically had more firepower and speed than any other destroyer at the time, making them fearsome threats in naval warfare compared to wimpy American and British counterparts. In KanColle, this is reflected by Fubuki’s “top-heaviness” that is mentioned a couple of times in this episode.

We get to see a little more of the ins and outs of the Naval Base this episode, namely the classroom (which is an anime original setting) and the docks, i.e. the bathhouse (which is in the game). The Heavy Cruiser Ashigara appears to run the class that Fubuki and several other destroyers are in. They don’t call her Sensei though, which makes me wonder what the education system is like for kanmusu. Maybe she’s just a sit-in tutor or something. The docks are interesting because they’re never really shown as anything other than a regular naval dock in the game, but the girls’ dialogue always implies that they’re getting into a bath when using it. We see this realized in anime form, and it makes a lot of sense (and makes for some expected fanservice shots). 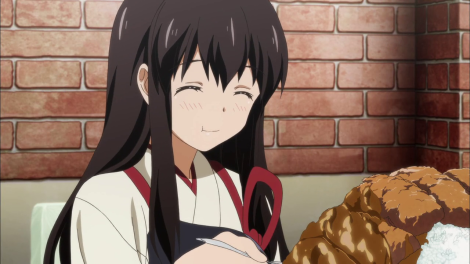 The KanColle has been good about staying reserved with the fanservice, which I appreciate. It would be very easy to go overboard with service shots just to cater to the series’ core audience of KanColle players, which I feel like is actually of people, but that would detract from the validity of this series as something more than a fanservice only show. Yes, it’s a show about moe ships, and yes, there are a lot of references that people who don’t play the game won’t get, like Akagi eating a lot of food because of her high bauxite consumption. However, I still think that this anime adaptation can reach beyond the cliche of being relegated to being a show only for crazed otaku. Just have to hope it won’t let these expectations down.

So far, I’m liking the development of Fubuki’s character, along with the scenes we got this episode with the Sendai sisters, each displaying her own distinct personality trope and using it to help Fubuki harness the three principles of the torpedo girl dogma: without dissent (悖らず), without shame (恥じず), and without resentment (恨まず). After skating on baseballs in the dead of night with Sendai and dancing in the middle of school with Naka, Fubuki finds that she’s become a little bit more capable. This is good because Nagato requests that they lead the next operation to reclaim W Island, next week!

Oh yeah, I’m also liking the OP and ED. The opening song 海色, “Miiro” which means the color of the ocean, is pretty catchy but I don’t quite love it yet. The ending song is called 吹雪, “Fubuki” which means snowstorm, is pretty unique. It blends together rock elements with militaristic march rhythms and fanfare. Not bad for a series that’s never really focused on vocal music at all.

“But, she has the spirit of a torpedo girl, and that more than makes up for it.” ~ Jintsuu