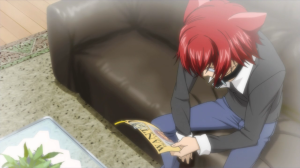 I was expecting a serious detective anime.

Cuticle Tantei Inaba is an odd comedy produced by Zexcs. Going in, I thought that I was getting a supernatural detective series that would end up being my serious anime this season. However, this series threw that notion out the window in episode one. We are still dealing with a detective series, but it has turned out to be heavily comedic in a “let’s be ridiculous and not make sense” kind of way. The story revolves around Inaba who is a fetish driven werewolf that has quit being a police detective and now does freelance work. Inaba, along with his assistants, use their great skill in order to stop a crime boss for the sake of Japan. This crime boss is a goat that likes to eat money. Let’s move on. 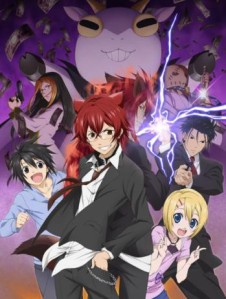 Well, one of these characters is kind of normal.

We actually get to see quite a few characters in episode one that may be important moving forward. Out lead is Inaba who is a werewolf with a hair fetish. Immature and wild, the former police detective now does freelance work with the aid of his two assistants. Kei is the straight man in this series and I feel very bad for him because he is a high schooler that has to deal with Inaba and Yuuta. Yuuta is the other assistant. Cross dressing and loving Inaba are two things that describe Yuuta very well which may sound more fun than it really is. Ogino is a police officer and Inaba’s former partner. Even an extremely doting father like Ogino can seem somewhat normal in this cast. Don Valentino is a talking goat that leads the mafia. The Don enjoys eating money and producing counterfeits, but he still uses old school methods of transportation and defense which adds to his odd characters. We see some mafia family members along the way, but you can basically count on anyone in this series being ridiculous. 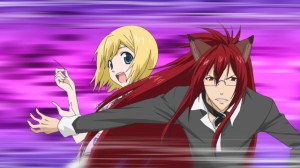 A werewolf and his cross dressing assistant.

I honestly didn’t really like this anime. The ridiculous elements were too shallow and comedic for me to take a liking to them and the characters didn’t really seem to be more than props for gags. I will give this series until episode five before I give up on it, but my expectations are low moving forward. 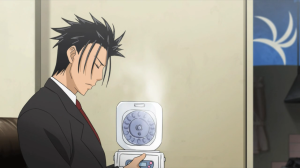 This anime is as ridiculous as drinking tea from a rice cooker.