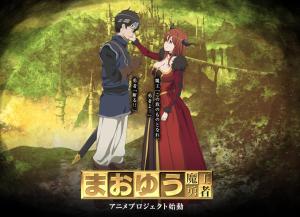 A pairing that was never meant to be.

Maoyuu Maou Yuusha is a new anime that is produced by Arms. The anime is described as a world where demons are at war with humanity and a hero confronts the demon king. That concept sounds extremely over done and warrants, but the series has a lot more going on that just that. The deeper elements of this series strike a glaring resemblance to another anime called Spice and Wolf. How many of you took U.S. History in school? Well, that class taught us that World War II got the United States out of the Great Depression due to the economic benefits that can accompany war. Maoyuu goes into the economic and social repercussions of war and separation of states. Don’t think that this is some economics lecture though. We get a taste of action with look ins on the war and some very engaging comedy. Not to mention that we get romance thrown into our faces right off the bat.

I am looking forward to the obvious roles that these characters will play.

Who here likes voice actors from Code Geass? Jun Fukuyama makes another appearance right after his role as Yuuta in last season’s hit Chuunibyou demo Koi Ga Shitai! and, if you don’t know who that is, you may know him better as Lelouch from Code Geass. The iconic voice is a great addition to our main character known as Yuusha. Yuusha is a hero that has gone to confront the demon king and end the war. Hero is brave, but not that well-educated and is weak around women. Our other main character is voiced by Ami Koshimizu who did Kallen from Code Geass. Maou is the demon king even though she is a young woman. Maou has awaited the arrival of our hero and wants to talk to him rather than fight. Maou is well versed in the way that countries work and very affectionate when she wants to be even though she lacks experience with men. Jun and Ami really enjoy voice acting together because they have done Kallen and Lelouch from Code Geass, Lawrence and Holo from Spice and Wold, and now Yuusha and Maou from Maoyuu Maou Yuusha. Yuusha and Maou show sparks early on and are about to embark on a journey filled with lessons about how the war is aiding the people on both sides and a little bit of romance for our main characters is sure to pop up along the way. Who am I kidding, there will probably be a lot of romance along the way. The first episode gives us a look into a few characters that we might see such as the kings of the human countries and the former traveling companions of Yuusha. Just a hunch, I think one of Yuusha’s companions likes him. 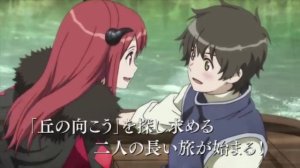 This ship sails itself. They even got into a boat together.

Watch Maoyuu Maou Yuusha. The mix of action, economics, and romance will entertain a great number of people. Think a more light-hearted version of Spice and Wolf. The entire time that I was watching this first episode I was on the edge of my seat waiting for the next laugh to happen. I was definitely happy with the fact that the story is deeper than just a fighter meets romance will hopefully garner this series some well deserved respect. In anticipation of episode two, I will be watching episode one at least four more times. 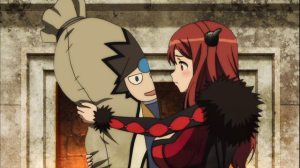 This scene made me forget that my favorite football team lost today.