An anime that surprised me.

When I had Bakumatsu Gijinden Roman on my list of things to watch this season, I was skeptical regarding its quality. The series sounded like some ridiculous action series that I would be forcing myself to get through. However, after watching the first episode of Bakumatsu, I was surprised by the fact that I have hope for this series. The series opens with our main character Roman breaking into a corrupt politician’s home in order to return money to the people. Apparently there has been conflict in Japan that has led to chaos in the country. As you can see, we are basically dealing with a Japanese Robin Hood. The setting is still in the era of Shoguns, but the level of technology has really confused me. Oh well, this is an anime.

For the most part I see Bakumatsu revolving around the five members of Roman’s justice team. Roman is basically the leader even though he is very irresponsible when it comes to handling his own life wasting his money gained as a helper on gambling. Roman is fueled by a love of his country in order to take back money taken from the wronged masses. Surprisingly he is neither a ninja nor a samurai. Roman has some oddly futuristic powers that have confused me because they don’t explain what they are in the first episode. Koharu is the young lady that lives with Roman and makes a living by crafting decorative chopsticks. Even though she is very strict, Koharu aids Roman on missions by tracking down targets with the help of her dog Sakura. Koharu refers to Roman as her brother at times, but I am starting to doubt that they are actually related. Hans is the foreign doctor that helps out Roman with various things including medical treatment. Gennai is the old man who is in charge of developing technology for Roman. Kanade is the priestess that uses disguises to gather information for Roman’s missions. The team has already shown their abilities and they make for a well-rounded team. 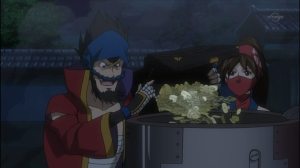 Don’t toss your money at this series just yet.

Bakumatsu is an interesting show. I would say that the goofy nature of the story doesn’t kill the series, but it can keep away some older anime viewers. The show is nice and it has a lot of potential. I am going to give this series at least five episodes in order to get a really good feel for what it will be like. At first glance it does seem to appeal to a younger crowd which is not a bad thing. For now I would say that the first episode was entertaining, if you liked the first episode you should keep watching, if you have mixed feelings you should try to stick it out for now, and if you are expecting something like Rurouni Kenshin you may want to look elsewhere.

I needed my Robin Hood fix.