Phew, a lot of stuff happens in this episode, and I mean A LOT, especially compared to the last few episodes where seemingly little happens. Slice-of-life works in mysterious ways, yeah? The episode opens with a flashback to the teenage years of Tamako’s parents. Now before I watched this episode, I had seen screenshots and GIFs of this mysterious girl and I thought that it was actually Tamako with a new haircut. For some reason, I thought she might have cut her hair in preparation of going off to get married to the prince or something equally ridiculous. Thankfully, the truth is a little less extravagant but no less exciting. It turns out that this girl happens to be Tamako’s mother, stumbles one day into old man Kitashirakawa’s mochi shop.

Jumping back to the present, everyday life continues as Mochi Day approaches. It also seems that Dera and Choi have been fully assimilated into the Tamaya Shop, with both of them helping out with chores and even cooking meals. However, Anko seems to be troubled all episode, and it happens to be about that nerdy crush of hers. He’s moving away, and she doesn’t know how to say goodbye. Thanks to some coaxing from Mochizou, Tamako, and Dera, Anko is able deliver some farewell mochi (not without some tripping first though).

Oh yeah, we finally learn the origin of the mystery song in this episode! Tamako overhears her father singing it on the night of Mochi Day and immediately interrogates him about it. The record store owner reveals that he and her father used to be in a band together back in high school, called Dynamite Beans, and the song was one that he wrote for her mother. A nice sequence follows showing flashbacks of Tamako’s parents meeting each other, him writing the song, and the band performing. Personally, I expected a greater mystery to come out of this when I learned about it in the first episode, and I felt that they gave us the answer a little too easily. Nonetheless, it makes for a heartwarming moment and it’s funny how embarrassed Tamako’s father gets when Tamako finds out.

Next episode, we’ll get to see more from Tamako to the baton master! 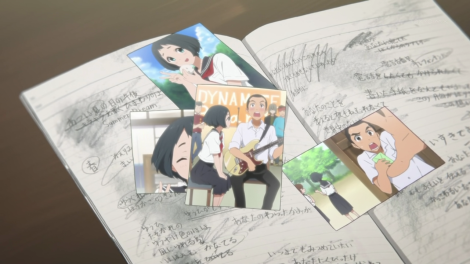