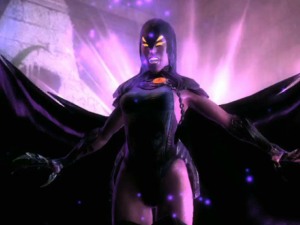 Things just got even darker.

Well, today we got some very interesting news regarding Injustice: Gods Among us. Raven was revealed through an official trailer as a playable character in the game. A good number of characters have been officially revealed already and the roster seems to be shaping up quite nicely. Raven definitely fits the dark theme that this game is trying to establish and I am happy to see her outside of the Teen Titans. Teen Titans is where I first got to know this hero and she definitely deserves to be in this game. her character seems to have some interesting powers and I could see her being a ranged fighter. The trailer shows off a projectile attack as well a telekinetic like control over objects. Whether or not her character was meant to function this way, people will definitely utilize these skills in order to combat the close range power houses.

On that note, IGN, Wikipedia, and the official Injustice site all have lists of varying lengths when it comes to the in-game roster. 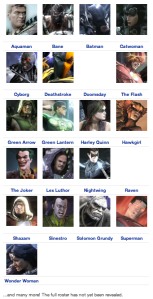 I am going to throw out the IGN list.

Although the IGN list is not the largest one, I think it is a good middle ground between the official site’s list that doesn’t have the confirmed Raven on it at this time and the Wikipedia list that some people may not find very reliable. The only character that is absent from the IGN list that is on the Wikipedia list is Black Adam. The cited a Facebook picture of some people picking characters and he appeared to be on the roster, but there are a lot of fake lists out there. I would definitely like to see Black Adam in the game because I have been getting into Captain Marvel recently and we could use some villains that aren’t from the Batman comics. I don’t have an issue with Batman villains getting the spotlight because they are far more iconic than most other DC antagonists. I would say that more people know about the Joker than Lex Luthor at the moment. Plus, the variety of villains in the Batman universe make for some very diverse fighters. You have the speed style Catwoman, utility style Joker, and power style Bane. Good stuff all around. However, the release of Raven can aid in fulfilling some requests for the lesser known DC characters. I would say that Shazam/Captain Marvel isn’t really a mainstream hero, but he was in the Mortal Kombat vs DC Universe game. I don’t really know how the story will go exactly, but the darker theme could mean that we will see Zatanna. Zatanna is a character that I would really like to see in this game, but seeing Raven as a character is kind of a double-edged sword. Her reveal means that they are looking for some darker and more obscure characters. On the other hand, Raven may already have filled the role that Zatanna would have played. Regardless, I am really looking forward to this game and I can’t wait for the rest of the roster to be revealed. 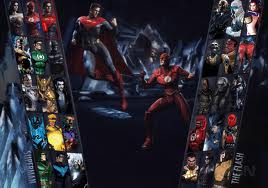 This picture drew a lot of attention on the internet.

Obviously, the most important part of most fighting games is the character roster and that will be even more important than usual in Injustice. You will have angry fans asking for their favorite characters. The picture that is directly above this section is a fan made roster that has been around the internet for quite some time. Some of the characters have made it in, while others are highly unlikely. Booster Gold and Atrocitus are two that I think would be tough to fathom being a part of this game. Who knows? I am no psychic. However, the desire for fans to use their favorite characters brings up an interesting talking point. How do you feel about DLC characters? Mortal Kombat has received a lot of negative feedback in the past due to their DLC exclusive characters  that forced people to spend more money than they had intended to for the complete experience. I am one of those people who don’t believe in paying more for DLC characters. What happened to unlocking characters in the story mode? I feel this way about every game except this one. You may be asking why I would be willing to spend more money on a game that I am already pumping $150.00 dollars into for the battle edition. I would respond by saying that I am a huge DC fan. I understand that there is no way the developers of Injustice can appease every fan when it comes to the character roster. People will wonder why Nightwing is there, but not Red Hood or Red Robin. With all of the Justice League members making an appearance, people will ask for members of the Teen Titans to show up. What about the villains? If Batman gets half of the villain roster, there isn’t a lot of room to fit in the arch enemies of our other heroes. All I am saying is that DLC characters are not only likely due to their presence in Mortal Kombat, but they would probably be received warmly by hungry fans. I could be wrong, but this is the one fighting game that I will have me religiously begging for more characters. 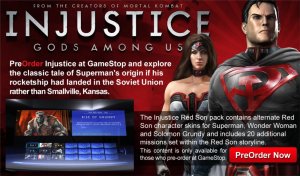 Do not miss out on DLC that is already set to be released.

Here are some links for information regarding this highly anticipated game: