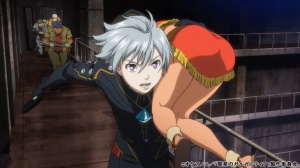 You always need a hostage.

I am way too excited after watching the first episode of Suisei no Gargantia. I enjoy the Gundam series and my favorite anime is Code Geass, but that doesn’t mean I like mecha in general. There needs to be a story involved. Some substance that makes it more than giant robots. That being said, the war between the roaming remains of humanity and an alien race made for a beautiful war scene to open the series. We get a career soldier that has lived so much of his life fighting that the promise of a vacation doesn’t eve get him a little bit excited. Well, the all out attack on the aliens has failed and our hero’s effort to delay the counterattack has left him separated from the rest of the fleet. Now, the future soldier has found himself in an oddly primitive area. Oh wait, it’s Earth. Earth flooded generations ago which forced the greater portion of humanity to relocate amongst the stars. Apparently, the fabled Earth still holds a population of humans that have made their stay on giant ships as they hunt for treasures from a lost civilization. Damn, there is the story that I have been waiting for. The whole relocation of humanity thing may seem overdone, but the execution thus far has led me to believe that this is something great. We are getting one of those serious series, but don’t think that it is too dull for a casual viewer. When the AI was analyzing the Earth language and describing the terms “mother fucker” and “shit” I found that to be quite funny. I mean, I don’t even know how to properly describe it. Not a lot really happened in this episode. A battle was lost in a war between aliens and advanced humanity, a soldier was flung to a primitive land which is actually Earth, and things do not look good when it comes to leaving the flooded planet. What happens next seems like it will be pretty straightforward, but I don’t see this being an average series. I don’t know about you guys, but I just have a good feeling about this one.

We only really got to know one person.

We didn’t truly meet more than one person in the first episode. Red was a soldier in the Galactic Alliance army who is now shipwrecked on Earth. Although he is a career soldier and the promise of a vacation doesn’t excite him, Red is kind. You know that he is because of the way that he reacts to losing comrades during the fight even though he may not personally know them. Red is going to be that robot character that doesn’t really know how to express his feelings, but someone will teach him how to enjoy life. Amy is a young girl that lives on Earth. She spends her days delivering messages to people who is a good use of her high levels of energy. I guess we found the person that will teach Red how to express his emotions. Honestly, we didn’t even get a good look at Amy’s character in this episode. We met a higher up in the Galactic Alliance military and quite a few members of the Gargantia crew, but some dialogue here and there doesn’t really count as introducing a character. Everyone outside of Red and Amy are listed as supporting characters on myanimelist, so you can expect a story that is possibly duo centric. Romance isn’t listed as one of the genres for the series, but I assume that there will be something between Red and Amy. I guess we will have to watch more in order to learn more about the other characters in this series.

Before watching the first episode of Suisei no Gargantia, I thought that Karneval was going to be my favorite series from this season. However, I feel that this series has way too much potential in the field of my tastes for me to not love this series. I am glad that this series was not written in America because it would be all over Fox News for pushing a liberal agenda. The planet flooding forcing us to relocate seems like a pro global warming thing to them. Oh well, this is anime, so let’s not focus on that. I love the idea of humanity making its stay on giant ships after the world is flooded. It just seems like a great story setting. Probably my favorite thing about this first episode is that, even though some stuff is pretty predictable, I think that there is room for quite a few different directions. I could see this being a series where the settlements fight each other due to corruption that is fueled by things like pirates or something and Red decides to forgo his quest to leave in order to help out the people who have given him a fulfilling life. There is that, or there is Red learning that there is more to life than the advancement of humanity and he forgoes his quest to return to the fight in order to live out his days on Earth. Then there is classic return to your world that can go one of two ways. Either Red leaves Earth E.T. style, or he takes Amy with him because they fall in love and there is the promise of a better life on the colonies. Honestly, the first is the most likely one to happen and they got stupider as I decided to keep typing, but they are all technically possible. I guess what I am trying to say is that this series shows so much potential that it has consumed my thoughts at this point in time. The art is fantastic and the ship design is ridiculously cool. Everything just seems to be there. I have been searching for something to fill the void that was left by the end of Code Geass and, even though that is quite the thing to try to live up to, I think that Suisei no Gargantia has a chance at being great.