Maybe it’s my imagination, but the cinematography was a step above the rest in this episode. It starts out with a flashback, utilizing horizontal black bars for a minimized widescreen effect, back to when Misaka first learns rumors about the project to clone a Level 5 (namely her). Continuing from the scene at the thug’s hideout, the mysterious girl reveals that she knows of Misaka’s cloning and tells Misaka that she isn’t strong enough to learn the truth of the matter yet. Naturally, Misaka is confident in her abilities and decides to investigate by doing some super sleuthing.

Her electromagnetic powers make her a perfectly capable hacker, easily obtaining information on the mysterious girl. She turns out to be Shinobu Nunotaba (CV: Ikumi Hayama), a pharmacology prodigy. Misaka then ventures into the old hospital that she gave her DNA map to, but not before shopping for a change of clothes first. She even rents a hotel room to use as a changing room! If I were her, I’d just change in the changing rooms at the clothing store or in the bathroom! But maybe I’m the crazy one. 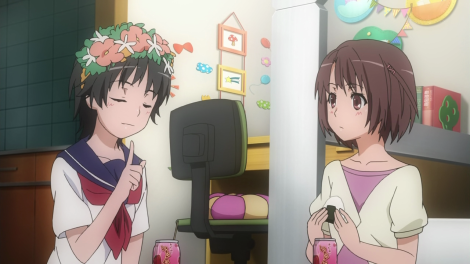 I have no idea where she has all the money to do this too and speaking of money, we get a scene with Saten, Uiharu, and their roommate (CV: Kana Hanazawa) from the first episode. I don’t know her character’s name, so I’ll just call her Kana for now. Well, Kana is really good at exploring the city because the amount of money cards totally trumps how many Saten got.

They also mention that they’ve never seen Mikasa where anything besides her school uniform (which I’ve never even realized, though I guess the swimsuit episode didn’t count?), since the Academy requires students to wear them at all times. I have to admit, Mikasa cleans up quite nicely in normal clothes. Though if she plans on not getting caught, she might as well not change at all. Again, maybe I’m the crazy one.

After some deft electrical manipulation of the surveillance system (I swear, the guards in this series are terrible. The one in the first episode was reading Oreimo, and this one was watching some mahou shoujo anime.), Mikasa makes her way to the central computer room. There she discovers the truth about the cloning project. It in fact did make use of her DNA, as well as help from Shinobu to give them intelligence. However, simulators projected that it would be impossible to fully replicate a Level 5 and that it would only be able to create Level 3’s at best. For this reason, the project was shut down.

Relieved, Mikasa calls it a night, but unbeknownst to her the room receives a second visitor that night: a clone of hers sent to delete the information she just read. I guess we’ll have to wait for next week, or maybe even longer, for the fated family reunion. Pretty interested to see what kind of relationship develops between the two.