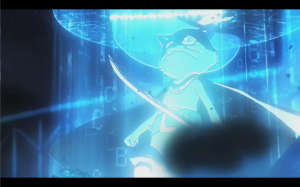 Team Nagoya is here to deliver justice with their cats!

This week’s episode is definitely packing heat as all of our characters are finally meeting up.  We start off with a touching scene where Daichi and Io catch up with Hibiki and convince him not to fight alone.  Meanwhile, Airi and Jungo successfully infiltrate the Nagoyo JPs branch and start a riot with their cat demons (Cait Sith and Neko Shogun).  Before too many insurgent grunts are harmed, Ronaldo and Joe quickly join the battlefield to stop the fighting.  Airi is set on stomping Ronaldo, but is suddenly stopped by the third Septentrione, Phecda.  At this point, the two teams decide to put aside their differences to unite against the boss, but are utterly beaten by its cheapness.  I remember this boss was a huge pain in the game, as it is normally immune to all non-Almighty type attacks and can only be defeated when it splits into two parts.  Hibiki and friends quickly intervene with their demons and prove to be quite effective when working together.  Unfortunately for them, the Septentrione is too strong and lays all of their demons to waste.  Just when it seems Hibiki’s dead-face clip is about to come true, the badass Hotsuin intervenes with a dramatic entrance. 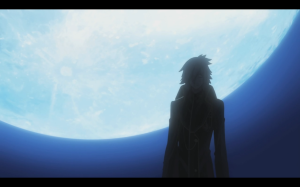 Hotsuin, with his overwhelming powers, gives his Cerberus a huge boost in strength and annihilates Phecda with relative ease.  After this, Hotsuin claims that Hibiki is one of his most valuable pawns and demands that he return to JPs.  Hibiki, conflicted over Hotsuin’s ways, summons Byakko and prepares himself for a throw-down.  Before anyone can make a move, Alcor appears on the scene and reveals that Hotsuin risked his own life to teleport to Nagoya after seeing Hibiki’s dead-face clip.  Hotsuin then proceeds to act a bit tsundere before the end credits roll. 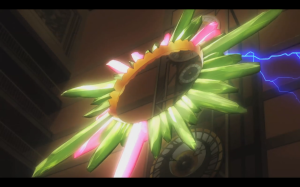 This guy is a pansy if you let Hotsuin fight with hacks.

Overall, I enjoyed this week’s episode a lot more than the one last week.  Unlike last time, where we were introduced to a ton of characters, this episode focuses on the tension between the two factions, which are developing due to the contrasting ideals of Hotsuin and Ronaldo.  We definitely see this by the end of the episode, as Hibiki is standing in-between the two leaders and is prompted to choose a side.  In the game, this was an interesting element as it tested the player’s moral point-of-view.  Should humanity attempt to form a world where everyone is indisputably considered equal, or should the world become more orderly with the strong leading the weak?  Or…is there another choice?  Due to this, I am very excited to see how the rest of this anime plays out.  Another thing I should note is that I really enjoyed how all of the characters are getting a chance to do something and show off their personalities.  Several people have been complaining about the characters being too one-dimensional (i.e. Daichi always being a whiny and useless support character), but I can’t completely agree with that opinion.  Although most characters fit a niche role, a few of them have been given some development.  Io has obviously developed into a stronger and reliable character, while Hibiki has changed a lot after considering his duties and options (being the MC, he can still change and develop of course).  Even Hotsuin has recently proven himself to not be a totally heartless jerk.  Instead, he’s a tsundere…..kinda.  It’s too bad that this week’s episode didn’t include a preview clip at the end, but I guess that will lead to a bigger surprise next week.  Who will Hibiki side with?  What will be the fate of the new party members?  I guess we’ll find out later, but until then, “Let’s survive.”