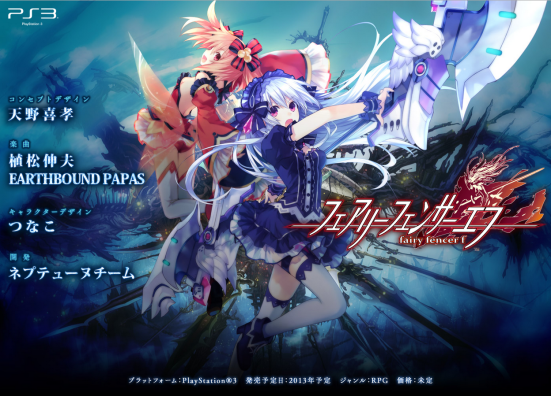 If you’ve been listening in through the RPG grapevine, you’ll know that Compile Heart has had plans for a new line of games that specifically aims to please Japanese gamers. This is pretty bad news in terms of getting such games localized in the West, since JRPG’s are hard enough to market to a non-Japanese crowd as it is. I’m interested to see how much more “Japanese” Compile Heart can make their games. The series they’re most famous for is Hyperdimension Neptunia, which features anthropomorphic video game consoles. And THAT still made it over to the West, so maybe there is some hope left.

For their new title, Fairy Fencer F, Compile Heart is assembling a dream team of big RPG names. First, we have Yoshitaka Amano who was responsible for the intricate character designs used in the original Final Fantasy games. Next, there’s Nobuo Uematsu, along with his band the Earthbound Papas, who has provided the music for Final Fantasy throughout the years. Finally, there’s Tsunako the character designer for both Neptunia and Date A Live.

Fairy Fencer F will be for the PS3.

Check out the official site: www.compileheart.com/fairyfencer_f/