Wow wow wow. Now I heard that things were going to get pretty serious soon, and this week’s episode of Railgun S certainly delivered. Though the first half of the episode was still funny, keeping in the same rhythm as the previous episodes. I really like Misaka’s clone, MISAKA 9982 or Misaka Imouto as some people like to call her.

She’s a surprisingly funny character, mostly because of her tendency to speak in the third person and without any tact restrictions. She’s also not as mindless as I thought she would be. Misaka Imouto feels compassion for animals, has a sweet tooth, and even appreciates the froggy button that Misaka “gives” her. All of this makes her designated purpose feel really messed up.

We’re also introduced to Accelerator (CV: Nobuhiko Okamoto, as in Rin from Ao no Exorcist), who is quite the antagonist so far. We learn that the Misaka clones are being produced so that he can kill them and achieve Level 6. Since the clones are relatively low Levels, the Tree Diagram suggests that he must kill 20,000 of them, with Misaka Imouto being experiment number 9982.

As far as we know right now, his power involves manipulating a barrier around him that can alter forces like gravity. This lets him redirect things like bullets, electricity, or even lift a train. It also seems like an automatic ability because surprise attacks don’t affect him either. 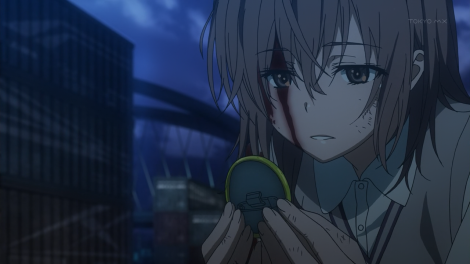 The episode did a complete 180 between the first and second half. One second we’re enjoying ice cream with the Misaka “twins” and the next we’re watching Accelerator rip Misaka Imouto’s leg off. This whole side story seems to be pretty important for Accelerator, who plays a big part in the main series too. So I’m wondering how all of this information was handled in Index. It also might be a lot to ask for, but I hope she survives getting crushed by the train. Judging by her prominence in the ED (as well as how cool of a character she is), I think that she could. The question I guess is how? I personally don’t know how she would, but I’ll be pretty upset if she doesn’t!