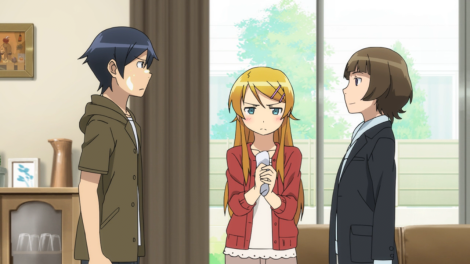 The emotional webs become more complex this week as Kirino reveals her second secret boyfriend, a co-worker at the model agency. He’s essentially the perfect man since he’s rich, handsome, and a hardcore otaku. Naturally, Kyousuke feels jealousy, but I suppose the question would be why? Is it because someone is taking his precious little sister away which triggers his overprotective instincts, like his dad? Or would it be because he has romantic feelings for Kirino? Or maybe it’s because he treasures the time he has with the whole group. If Kirino got a boyfriend, it would ruin the group dynamic that they have, regardless of whether he’s really an otaku or not.

Thankfully, we get more Ayase in this episode, which makes anything better. We can never get too much of the yandere route, after all. It just makes me wonder where she got those handcuffs from… Ayase also freaks out at the thought of Kirino having a boyfriend. In this way, she and Kyousuke are pretty alike. Though, I don’t think Kyousuke has any desire for killing anyone.

Things come to a boiling point when Kyousuke confronts Kirino and her “boyfriend” about their relationship. She totally loses it and reveals that she’s jealous of his flirting with both Manami and Kuroneko. Like brother like sister, huh? It also turns out that the whole boyfriend thing was just another ruse set up by Kirino to kind of get back at Kyousuke.

The biggest surprise happens at the end of the episode. It’s hinted throughout the whole thing, but Kuroneko finally builds up the courage to ask out Kyousuke. Who knows how he’ll respond to this, but I predict that he’ll play it off somehow…