This is what I have been asking for. I am a big fan of romance anime and I  was really happy with how they have handled Mahiro pretending to be engaged to Kuuko. They spent a good amount of time having everyone follow the two actors on a date. They had crepes and sat in a park, which is nice, but far too normal to be the main event for a date in this anime. They end up in a jewelry store in order to shop for an engagement ring and a book store in order to brainstorm some baby names. You know, the things that you do on dates. What I knew I was getting was some romantic comedy, what we got was some actual plot progression. Well, I guess that depends on what you define as the plot in this series. Some people may say that it is this is a comedic series about aliens targeting Earth with romance thrown in there to further the comedy. I feel that those people are a minority and that this is a romantic comedy with sci-fi thrown in to further the comedy. That is why I consider the relationship between Mahiro and Nyaruko to be the driving force of the actual plot that we rarely see in this series. So, when Nyaruko seriously confronted Mahiro about everything that has gone on and what his true feelings are, I felt like we were finally getting some real development. It held a level of seriousness that we do not normally get from this series. Oh, and Kuuko’s cousin shouldn’t be a problem anymore because this is a comedy and actual issues never really persist. 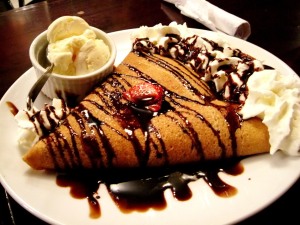 I haven’t had a crepe in ages.

I have definitely been reminded of why I like this series. Kuuko’s strong presence was once again a very great this to have. It is nice to see her character function in an environment where she is not simply there to try to have her way with Nyaruko. I understand why that dynamic exists, but I don’t think that it is still necessary. Even though that is still a thing, it is quite obvious that this arc was Kuuko’s official entrance into Mahiro’s harem. I know that she was kind of a part of it before, but this was a real showing of her true feelings for Mahiro. I say all of these things, but I fear that Kuuko may go back to the way that she was before. She may not just go after Nyaruko, but they may leave her in the background as far as screen time is concerned. It is pretty obvious that the goal of this series is to have Mahiro and Nyaruko be end game. I think that being that obvious sucks. Not that I hate the idea of Mahiro being with Nyaruko, but a lot of romantic anime do this thing where they have a clear winner and the other characters just don’t get any more development. It is unfortunate when you actually like a character that you know can’t win the race for the protagonist. Oh well, I am hoping for some actual development because I don’t know how much longer Haiyore! Nyaruko-san can go on after this season.