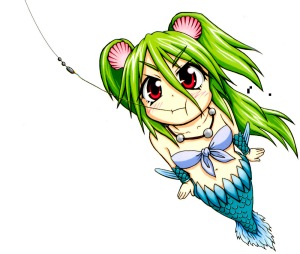 Well, we did get to see more Takkun this time around. Ryuuguujou closed down and that left a lot of people out of work. Honestly, that is all that we really get from this episode. Takkun catches a giant oarfish who used to work at the place. The guy was looking for a job on land because things aren’t going too well on the ocean job front. However, the guy has no noticeable skills and is a bringer of back luck. That part wasn’t that important. Well, I don’t know if anything that happens in this series is important, but the other person that we meet seems to hold more meaning in the long run. Otohime was the tyrannical head of Ryuuguujou because it was taken down. What happens when you have bills to pay and you can’t rely on your old job to cover them? You get a new job. It turns out that the chick with the black hair and glasses in the opening is Otohime. She is working at the fishing shop that Takkun likes to go. Takkun spends the majority of the episode hinting at the fact that he knows Otohime’s true identity. This messes with her because she doesn’t know what he is after. Takkun isn’t really after anything and he ends up realizing that he never should have gotten involved with Otohime in the first place. 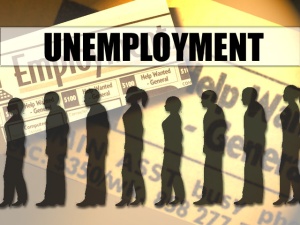 This is a big problem in a lot of places.

I am not ready to say that my general opinion regarding the show has shifted, but it was nice to see Takkun get some more screen time. Like I said, the straight man has to be there because the comedy has to go through him. The interesting thing about this episode was the focus on unemployment and people who were used to making lots of money having to take on minimum wage jobs to make ends meet. If I thought more highly of the writing in the series, I would say that it was a very interesting commentary on the almost global unemployment issue. Unfortunately, I can’t give the series that much credit yet because of what we are used to getting out of Namiuchigiwa. Unfortunately, I want to call it an accident. The really good thing is that I did enjoy watching this episode. It was nothing special, but I found the humor to be at a higher level than it had been in recent episodes. The other episodes would have functioned much better had they not left Takkun on the bench. I was recently brought back to what I felt from Senyuu. in the last season. Would this series function better if it had full-length episodes? Honestly, I think that this one may not because doubling the length might not do much for this series story wise. The style that this series is using would probably leave out an actual story regardless of how much time the writers received. That, and the fact that humor shouldn’t improve based on time given, make me say that Namiuchigiwa is about as good as it is going to get if you are simply arguing time allotted to it. I just hope that they remember how the straight man dynamic works when they are writing the rest of the season.