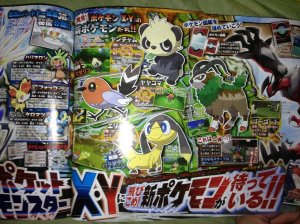 I will never be too busy to enjoy a new Pokemon reveal.

Well, we got another big announcement from those Pokémon people. The crazy thing about this update is the fact that it is full of new information. Four new pokémon have been revealed, the area has been confirmed, and some interesting game mechanics have been thrown out at us. What does all of this mean? Honestly, it means that we are getting pretty close to the international release date. October can’t come soon enough. Everything that came with this reveal has me excited, so let’s get down to the details.

Here is your basic bird thing.

We should always start things off with one of the first pokémon that you will encounter in the game. It is assumed that this little guy will be that bird that we see at the beginning of every game with a rodent that we have not been introduced to yet. I guess that I like its design. It is a robin. Nothing too crazy about it. What is interesting about this one? Well, it gets Nitro Charge. That isn’t a new move because we should know that its translated name is Flame Charge. We can assume that this one will be a physical attacker because if it isn’t, then they are introducing this little guy in a very odd way. Hopefully, it will be an asset like Staraptor and not a failure stat wise like Pidgeot.

I normally like electric pokémon, but this one looks pretty stupid in my opinion. The headgear is throwing me off. It could improve if and when it evolves, but I need it to undergo some major changes if I am going to be using it in-game. What is interesting about this one? I am pretty sure that they are trying to make this thing a natural solar panel thing. Obviously, they are going to play off of the fact that cold-blooded animals function like that and that is why this electric pokémon is a lizard. The move that they showed off for this little guy basically confirms this theory. Parabola Charge is a new attack that is basically an electric version of Giga Drain. I really like the concept behind this pokémon, so it will really piss me off if it doesn’t look better in a later stage.

We would get a panda.

Can you say Kung Fu Panda? I guess it was inevitable that we would get a panda pokémon. It is actually a little surprising that we didn’t already have one. Honestly, I think that pandas are an overrated species of bear, but that is an unpopular opinion. There is nothing that special about the design as it is. What is interesting about this one? The fact that Parting Remark is a super U-Turn. You get to switch out and give the opposing pokémon -1 Attack and -1 Special Attack. That is not even fair. “Oh no! A Physical Attacker just switched in. I better use Parting Remark and go into my Intimidate user. Oh wait, that Physical Attacker just hit like a Spinda.” That move better not be given to a lot of pokémon.

Xerneas isn’t the only forest creature that will be in generation six. Honestly, this is my favorite design from the four new pokémon that got released. It is a goat for crying out loud. That is pretty cool. Although, I am not too fond of the name as it is. What is interesting about this one? There is a picture that I will talk about later where the main character is riding this thing. Are we looking at mounts? Possibly, and that really excites me. As far as moves go, horn leech is kind of a given. A grass thing with horns.

This is something that we have been waiting on since Ash took that Rapidash for a ride. The screenshots show the characters riding on a Gogoat in Miare City. The full details regarding this new mechanic have not been confirmed yet. For all we know, you can only ride a Gogoat in Miare City. That would be pretty stupid in my opinion. Some people think that this will replace bicycles in the game. That is not ridiculously far-fetched because we already saw what appeared to be roller skates, but the new trailer still had running in it. We might get to see four forms of faster travel. This game could be getting really innovative. I assume that you will be able to ride the pokémon in a lot of areas, but the pokémon that you can ride is the head scratching subject. Gogoat is the “Ride Pokémon” and that could mean that it is the only one that you can ride. On the other side of the argument, we may be able to do this through an HM like with Fly and Surf. If that is the case, then I assume that the pokémon that get the riding move may have to make more sense than the ones that get Fly and Surf. You can fly on a Tailow for crying out loud.

This is something that may not have been the biggest issue with the older games, but it is definitely a welcome development. Being able to make your character unique is something that player have enjoyed in RPG’s for years. This is something that was teased in one of the trailers, but this confirms that you can mess with your hair color and complexion. I look forward to this, but it doesn’t get me super excited.

I am not a fan of French food.

Country that the Area is Based On: France

Well, generation five gave us America and the other games kept us in Japan for this most part, so Europe is a natural next step. I have never been to France, but I am told that it is a beautiful country. The region is called Karos and Miare City is the game’s version of Paris. You can see what looks like their take on the Eiffel Tower in the lower screenshot. I guess that it is nice to see the game being based on different areas around the world. It gives each of them a unique feeling.