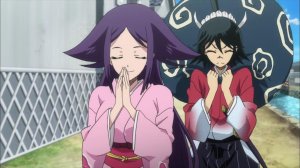 Do you know what this series was missing? Jun Fukuyama. That guy just makes a series better. Well, he finally brought his voice acting talents to Mushibugyou and I think that his character will become pretty important in the long run. Nagatomimaru is a masked man that snuck into the Insect Magistrate building in order to gain knowledge from their secret archives. Honestly, sneaking into a place that is filled with people that fight monsters for a living is a pretty stupid idea. The guy gets captured and he ends up spending a lot of time with Jinbei. That is bad because bugs will always find their way toward the main character. This time we got to see a giant mosquito. That is pretty funny because we spent a good deal of time fighting a Mosquito while watching Anchorman at Daniel’s birthday party. Those things are evil. Well, we learn during the fight that Nagatomimaru is actually the next in line to become Shogun. He has no talents physically speaking, but he has spent his time gaining a great deal of knowledge from various writings. Nerd. This knowledge helps Jinbei defeat the mosquito and the two go back to party with the guys back at the Insect Magistrate building. Nagatomimaru ends up breaking into the archives and what he finds is very troubling. Kotori shows up to stop him by making a deal because you can’t threaten the next Shogun. I am excited to see what comes from this secret knowledge. 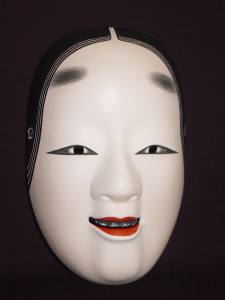 I am not fond of these masks.

I am really intrigued by this new development. We should have all been curious about just how bad the bug infestation truly is, but I didn’t imagine to get a look at it this soon. Do you remember when they said the spies that they sent out didn’t come back? A very ominous map from the secret archives basically revealed that Edo may be the safest area in Japan. I really hope that they can take a look into the origin and current state of the bugs very soon. On a less serious note, Nagatomimaru may become a fantastically hilarious character. The guy has become quite fond of Jinbei and, although it probably not romantic in nature, those feelings could make for some great comedy. I am waiting for the first time that Jinbei takes Nagatomimaru to meet Koharu. It will probably be hilarious. Saying that you will visit someone everyday is no laughing matter. I guess that is really all that I can take from this. I like this show because it is doing what it wants to do very well. Mushibugyou is a fun watch for the most part. The very serious plot may be nice, but I am looking forward to the festival in the next episode.