Well, I think that things are finally starting to come together. What has sucked about the previous episodes? We have been watching pornography. What was the one thing that most people were looking forward to? Some actual fighting. You know, because this is an anime that is supposed to be a bout a group of people who have inherited murder weapons hat instill mystical powers onto their descendants. Also, there is that whole race to kill the hair queen. I will understand if you forgot about that because of al of the pornography. However, this episode seems to have granted a few wishes.

The fight is on.

A fight took up a good majority of the focus this time around. Let’s call it round two of the Kiri vs Seigi fight. There were two things that I had questions about going into this fight. The first one was why Kiri can’t simply cut the noose that is around his neck. From the way that the fight has gone, I can only assume that the killing goods cannot destroy each other. They are cursed items and it would make sense if that was part of the rules in this universe. That is an assumption, but I will accept it as an answer for now. The second thing has to deal with fighting Seigi. Being able to hang your opponent from a medium range should be unfair against a close range fighter like Kiri. However, they proved that you can swing around on what seems to be an indefinitely long rope. Damage can affect Seigi’s focus as well. That was actually a pretty interesting fight.

The Byouinzaka sisters lie in wait.

I was wondering how many of the other authors and insteads were actually at the party. From what I can tell, there may be four authors in total. One of my other questions regarding the fight has to do with the Byouinzaka sisters. Houko wants to use the wish from killing Iwai to rid her sister of the curse, but she is just watching the fight. I am wondering if they would save Kiri if it looked like he was about to lose. Not because they are friends, but because they need him to take out the other authors before they can strike. Gossip may be tying their hands, but they will have to strike eventually. That is an altercation that could be underwhelming.

I have never been in a play before.

I have been waiting on something like this. An episode that actually focuses on the plot of the anime is always a good thing. Seeing Kiri and Seigi going at it again was nice, but I did not expect round two to occur this soon after they were interrupted at the school trip. Having said that, this was the most excited I have been during this entire series. There were a few things that bothered me about the fight with the escaped prisoner. Although the fight ended in a somewhat questionable matter, it is pretty obvious what the out is going to be. Unfortunately, any mystery regarding that was crushed by the preview for next week. I guess the fact that nothing was fatal was apparent enough for the director to think that it was alright to show it in the preview. I am really hoping that the rest of the season can continue on this path. Kiri is really starting to grow as a fighter and I am really surprised by how this altercation was handled. I was worried about how fights would go with all of these unorthodox weapons, but the writers did a great job of choreographing a very cool fight. I might sound like someone who has action on the brain, but this series needed it. Let’s just hope that they remember that this is an action series. 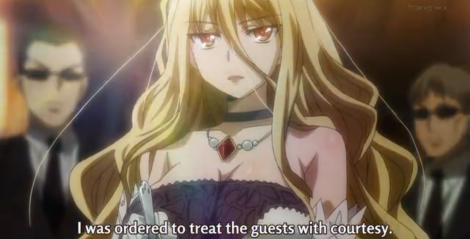 A challenger has arrived?