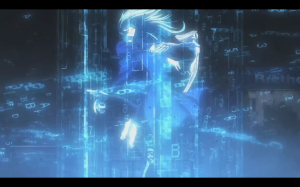 Alright….this week’s episode has left me with mixed feelings.  While a few cool things happen in the events of this episode, a ton of losses have occurred for our heroes.  First off, we continue from where our party members have split into three teams to take on the multiple clones of Megrez, the fourth Septentrione.  The problem is that all clones must be eliminated simultaneously, or else they will regenerate indefinitely.  In the midst of the battle, Hibiki and Io receive a dead-face clip of Ronaldo, Otome, and Joe.  Although Hibiki tries to talk Ronaldo and the others into leaving the vicinity, Ronaldo insists that he is strong enough to change fate.  Meanwhile, Airi witnesses the destruction of her favorite concert hall and goes into rage mode over the loss of her friends, family, and memories.  She miraculously summons Lorelei and pins down the Megrez clone of Nagoya for an all-out-attack.  Luckily, the other two branches have no trouble with destroying their clones at the same time.  When everything seemed to be going well, Nagoya’s clone of the Septentrione decided to launch a volley of missiles at the last second, causing the dead-face clip to come true.

After this awful event, most of our members grieve over the severe loss of their comrades.  As everyone is grieving, Hotsuin continues with his plans at HQ and Hibiki heads off on his own to reflect on the nature behind the Septentrione.  Alcor then appears to further explain his own existence and reveal Polaris as the one behind the current trial of humanity.  Polaris is said to be an almighty being who recently judged humans to be a detriment to the natural order.  As Hibiki explains how he feels that such judgment is unfair, Alcor completely agrees and shows a strong concern for the human race in which he apparently watched over since the beginning of time.  Another thing that Alcor reveals is the sudden appearance of the Void, which is now starting to consume the entire world.  Humanity’s trial is limited to seven days and this is further reinforced by the Void consuming the world at a fast pace.

The world will be no more…

Overall, I was very depressed over this episode as they simply killed off three members of Nagoya.  Losing Keita was one thing, but losing three characters in which I had no problems with…that was painful.  I actually liked Joe a lot in the game, so killing him off so suddenly in the anime was a douche move.  With the three gone, the ending credits are now very empty and hollow.  At this point, I wouldn’t be surprised if they decided to sacrifice Io.  If they’re going to allow so many party members to die, I hope they at least power-up Daichi to a decent level to make up.  While his weakness and uselessness was a funny gag for a while, it is starting to get quite annoying.  The three characters that died were certainly more useful than Daichi and shouldn’t have been killed off without a good reason, as even Hibiki says in the episode that their deaths were meaningless.  What I am currently predicting and hoping for in terms of an ending, is some kind of reset to bring the dead members back to life.  This episode has definitely put me in a sour mood, and I hope that next week’s episode can somehow remedy this.  Until then, “Let’s survive.”  (Unlike Ronaldo, Otome, and Joe).  Damn it, not cool.

Why couldn’t Airi and the others get more backstory?