This series never disappoints me. We left off on Rika getting way too involved with Yusa’s life. The misunderstandings in this series are pretty crazy. The fact that most of them involve romance is something that I really love because I am a shipper at heart. Judge me now. Oh well, not a lot happened in this episode, so let’s get to it.

That question should be directed at everyone that is watching this series because everyone knows what is really going on. Most of the episode was spent trying to convince Rika that she was misunderstanding the situation, but Ashiya was the only one that could get through to her. We got to hear a brilliant story about how Maou and Ashiya were actually in charge of a construction company that got taken out by a major corporation that Emi worked for. The parallels were there, but only an anime character would believe it. The Ente Isla gang look way too young to be doing what they say they are. The funny thing is that Rika might have a thing for Ashiya. I was waiting for something like that to happen. The fact that Rika acknowledges Ashiya’s housework means that this interaction could get pretty interesting.

The business world is a war zone.

Ashiya’s research did bear fruit and they figured out why everyone was going to Sentucky Fried Chicken. Whenever a new shop opens, people will check it out because it s new and this one even gave out coupons. Maou struggled with a strategy to bring back customers, but the guy does work well under pressure. Participating in Tanabata was the key. Having a festive environment is very welcomming and it helps build a bond with the community. This amazing strategy wowed Rika and basically held the facade together. This is proof that you need to treat all competitions like they are a war.

I am really confused regarding the direction that this series is taking. It is not like the writing is bad because things are still hilarious, but there is the actual story going on in the background that wasn’t touched on at all during this episode. It seems like everyone is getting used to life in Tokyo, but you can’t forget that Maou is responsible for the loss of countless lives. Maybe they will touch on that again in the next episode because it seems like Suzuno wants to make a move. On the other hand, I really want to see something happen with Rika and Ashiya. I can’t say that I love the pairing, but I just want to see more Ashiya and I think having a courtship for them would definitely result in that. Also, it could be nice to see more Rika. 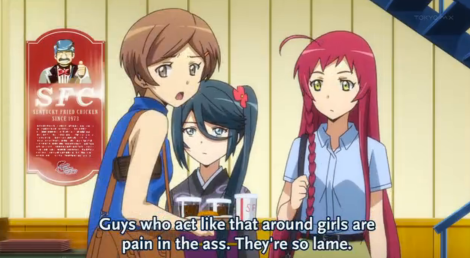 James needs to calm down.

That SFC manager really needs to calm down. I know what his real name is, but let’s call him James for now. James was really creeping out Chiho in last week’s episode and he did some odd stuff to Rika and Emi this week. I want to know how people feel about getting your hand touched during an exchange like that. I am from Oklahoma and we shake hands for almost everything back there. However, I am still uncomfortable with any uninvited touching. Also, that speech he gave Emi was odd. It is always weird when a stranger tries to get too involved in your personal life. Oh well, that guy is creepy and I could do without him. Overall, I am waiting on the story to progress a little more. It seems like there is going to have to be more than one season to finish this, which isn’t a bad thing because I love this show, but it is bad because I am going to have to wait on more. The waiting and the uncertainty that comes with it is what kills me. I guess that I really just want to see Emi make a major move in any direction. 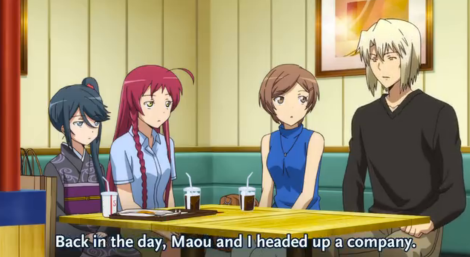 This was a great story.