Episode 10 – “Tears of the Beast Handler”

This week, the First Ship takes us all on a field trip to Jurassic Park! Or at least that’s what it feels like. It’s a haven for endangered animals, and even poachers don’t seem to stand a chance against the wily creatures. We learn that the power of Circus’s bracelets is derived from a cell taken from organisms here. They call it the omnipotent cell, Incura, which is responsible for regenerative abilities observed in the animals as well as the materializing abilities possessed by the Circus shipmates.

Of course, there has to be a catch. Using these powers requires a lot of training and control. Shadow Yogi broke out because Yogi essentially lost the ability to control the Incura when his bandage came off. That makes me wonder if he’s actually incredibly strong, but he just can’t control his true potential. Also, Yogi’s transformation into Yukkin was adorably hilarious. 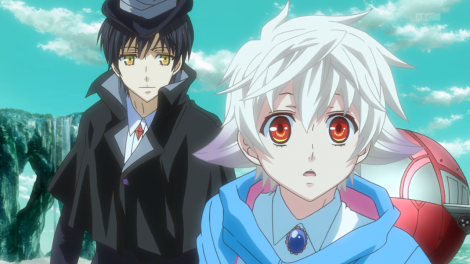 More existential questions arise when one of the animal caretakers confesses to using drugs (most probably of the Varuga variety) on his goat dragon, Kiri. Like with Tsubame and her brother, the drugs weren’t used for anything malicious. He only used them to save his friend, even if it meant that it would lose control. It kind of breaks my heart that Kiichi had to kill it, and I’m sad that they downplayed the whole thing because it was an emotional part.

The concept of home, belonging, and purpose comes into play again this episode, as both Nai and Gareki question where they would go back to. They both have no families, and Gareki’s only home in recent memory was torn apart due to the Varuga experiments. Gareki also doubts his abilities to be helpful, especially after seeing how useless he is against Jiki in combat. Suddenly, the reason Yogi has them say “I’m home” when returning to the ship becomes apparent, and it’s a pretty touching thing to do. It also makes me wonder about the backgrounds of the rest of Circus members.

I’m predicting that Gareki will somehow get his own bracelet and become a full-fledged member of Circus. That’d be pretty sweet. I just wonder what kind of abilities he would have… Oh yeah, and Tsukumo’s alive too!

One response to “Impression – Karneval, Episode 10”