I’m incredibly sorry for the late impression post. My new apartment doesn’t have internet at the moment, so finding the time to watch airing anime and post anything is tough. Plus, I’m taking a summer class on top of everything else. But enough excuses from me because this week we get to see more Ayase! Despite how evil Ayase seems to be, she actually has some good intentions. She even feels guilty when she thinks it’s her fault that Kyousuke and Kuroneko broke up. Of course, their breakup had nothing to do with her, and Ayase’s reaction to that realization is pretty hysterical. She punishes Kyousuke by forcing him to accompany her to the Merufest.

Unfortunately for Kirino, she’s stuck at work with no way to get to the Meruru and ClariS concert (don’t you hate when that happens?). It’s funny how ClariS, the duo that sings the Oreimo openings, is mentioned in the episode but they don’t show them. I think it’d be a perfect opportunity to show them off since the two girls already have official anime caricatures. In fact, that’s what they look like as far as the public is concerned since their real names or pictures aren’t known by anyone. This is all done so that they can focus on school. I bet they feel like mahou shoujo, having to protect their identities from everyone.

A few episodes ago, we had Kyousuke and Kirino pretend to be boyfriend/girlfriend. This week, they’re more or less posing as husband/wife, riding into the sunset on the most suspect bike in the world. Seriously, what person puts pictures of a naked loli on a bike and doesn’t expect to get arrested on the spot? It also has training wheels. Though, I sometimes see a bike in my city that has Anohana stickers all over it. It’s pretty rad. 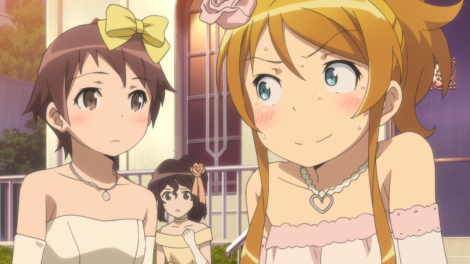 Despite Kirino’s tsundereness, it looks like she’s learning how to say thank you every once in a while. With this and everything else that’s been going on, the imouto flags are being pulled left and right. We’ll have to wait and see whether this season will be the closer or if we’ll have to go to a third season. If they do go with the incest route, I’d interested to see how the story is handled. It’d definitely be one of the first in my experience that would tackle such a issue.