Have you ever read or watched War of the Worlds? Well, it introduced an interesting concept where aliens, even if they are much more advanced than us, are susceptible to Earth diseases. Why is this? Well, the theory is based on the fact that people do not build up a general immunity to all diseases. We may become resistant to local ailments over time, but there is a reason for getting a number of shots before you travel internationally. Our diseases could be deadly when it comes to an alien race. Now that the lesson is over, let’s get to the episode. 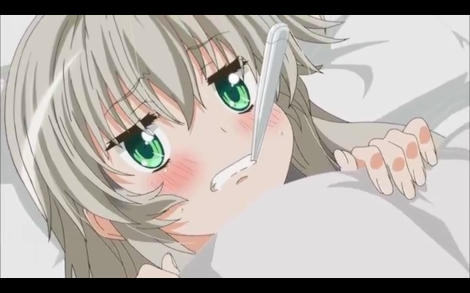 The episode opens with Nyaruko getting a cold. Her fever is ninety degrees celcius, but that is because she is an alien. While she is down, Mahiro is actually much nicer to her. Why is that? Well, the guy does care for Nyaruko. Also, the illness is keeping her sexual advances at bay. I am pretty sure that the series has established the fact that Mahiro would probably like Nyaruko if she would just calm the fuck down. Tamao is continuing to act odd as she questions what she is to Mahiro while talking about his lack of affection towards Nyaruko. Once again, I assume that Tamao likes him, but I have no idea what the writers plan on doing with her character. I guess you can say that this entire sickness thing was foreshadowing for the other thing that happened in this episode.

These guys are brutal.

I guess that massacring things that look nothing like humans is completely fine. They sliced up and blew up a bunch of aliens because an army from Pluto showed up in order to mine all of the resources on Earth. The plan was to monopolize the sale of Earth stuff so that their leader can visit his favorite escort. Only in this anime would an intergalactic incident be caused over the desire to visit an alien escort. The fight was brutal and Nyaruko had to leave her sickbed in order to help out. Everyone thought that spreading her illness would save the day, but it was actually a song that destroyed the aliens. Being weak to music is an odd theory regarding aliens that makes much less sense than a weakness to local diseases. Everything worked out in the end because this is a comedic anime. 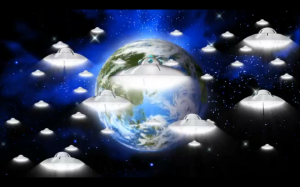 I guess that flying saucers are just a thing.

I guess that I am enjoying this series. Like I said before, it is not always easy for me to identify what makes me watch Haiyore! Nyaruko-san. The premise is ridiculous and I keep thinking that this is the kind of series that I would have dropped in hindsight. I mean, Bryan has gotten me into more series that has high school girls doing things that high school girls don’t normally do. I am pretty sure that I am going to give Girls Under Panzer a try pretty soon. I guess that there is just something about this series that makes me feel like there is always time for it.

Just do it dude.

If it wasn’t clear before, than I think you should realize by now that Kuuko’s mentality regarding Mahiro has permanently changed. Her role in the harem was not that big before the false engagement arc and I have already stated how I feel about this development. It sucks that characters in a harem situation only get screen time when they are with the protagonist, but I can’t really help that. I am happy to see more of Kuuko. What does the rest of the season have in store? The preview for next week’s episode showed Mahiro and Nyaruko alone in a cave and Tamao getting pretty aggressive with our protagonist. I guess we are getting a heavy does of romance pretty soon. I guess that is exciting. I really just want to know what is going on with Tamao. 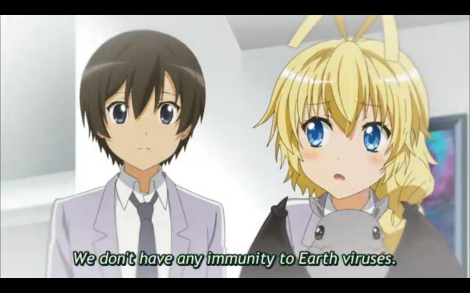 War of the Worlds will live on forever.