Well, the final episode of the season is out and we knew that they weren’t going to cover everything that was out there. Don’t expect to see Kurumi being saved or Origami finally being relieved of her vendetta. This episode is all about saving a certain someone’s cute little sister. Let’s see what happened.

The “truth” has been revealed.

Well, there is the fight that was obviously going to happen. Shidou’s plan to take Kotori to the theme park without any of his helpers worked out flawlessly and she would have been sealed very swiftly had it not been for Origami. She brought out the big guns which were oddly ineffective against Kotori. I guess that Mana’s magical enhancements are just that strong. Shidou spends a lot of time trying to plead with Origami in that classic protagonist style. He doesn’t want to lose his sister to death or his friend to a world of murder. Things don’t always go that well in real life and those words to not reach Origami. Tohka and Yoshino show up to stall for time even though they don’t have access to their full power and Shidou finally turns Kotori back into a human. This triggers an event where the siblings recover their memories from five years ago and they realize that it was a spirit that robbed Kotori of her humanity. The only thing that stopped Origami in the end was the fact that her body finally gave out. Luckily, no one died this time. 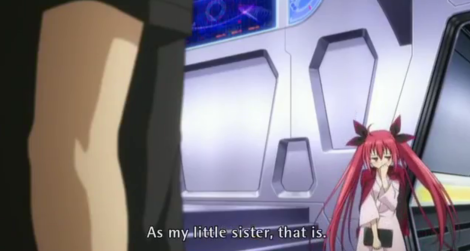 I must thank the writers.

Good job writers. Even though they gave themselves an out by making Kotori his adopted sister, they made it so that Shidou only loved Kotori as a sister. Incest avoided for now. Kotori wasn’t too happy about this, but I really appreciated that line. What else happened in this episode? We got a glimpse of Kurumi, so we know that she hasn’t left the city. I guess that is something to look forward to in a possible second season. Oh, and Tohka basically confessed to Shidou. She said that she doesn’t like it when he kisses other girls. After that, they had two blue ball inducing kiss scenes that never connected. It is pretty clear that they are pushing that pairing. I guess we need to wait on the OVA for more.

That is a cool mech.

I really enjoyed this series. I would have been fine with a romantic comedy that never really had anything crazy. I watch a lot of those and this one had what it took in that department to be entertaining enough. What put the series over the top was the crazy action. I never expected them to throw out things like murder and magical experimentation. I liked all of the characters for the most part. Each of the girls had their own appeal and picking a favorite has been difficult. Having said that, it wasn’t always the easiest thing to watch. It felt pretty slow in the beginning and having a major event like what we got in this last spirit arc is what saved it from feeling very incomplete at the end of the season. There was a lot of stuff left open, but you can’t just end a season without having a major event take place. There is a lot to look forward to in the future because we still have Mana’s magical issues, Origami’s possible lingering rage, Kurumi’s sealing, and the actual romance to deal with. It is a good thing that we are getting an OVA, but waiting on a second season could be rough for fans.

Way to almost announce a winner.

What is it with characters that are voiced by Marina Inoue getting their kiss cut off by the other love interests? I found it pretty interesting that they would do something like this. I guess that Tohka has been the most serious candidate in the harem for quite a while now and they wanted to remind us of that. Kotori and Mana are his sisters and I think that the writers are going to leave them out. Good job writers. Origami will have a pretty rough time not being too creepy for Shidou being his stalker and all that. Yoshino just seems like she isn’t a serious romantic candidate. We don’t know how old the Spirits are, but she is the loli character. Also, it looks like they are starting to have that sibling relationship. On the Kurumi front, we don’t really know what is going to happen with all of that. There is the possibility that saving her from her other selves and ending the murder may bring them very close, but they are pushing Tohka pretty hard. We also have to prepare for more spirits that will inevitably show up if a second season airs. I guess I should say that I really enjoyed this show, I don’t mind Tohka winning, and I look forward to the OVA and a possible second season.

That is love right there.