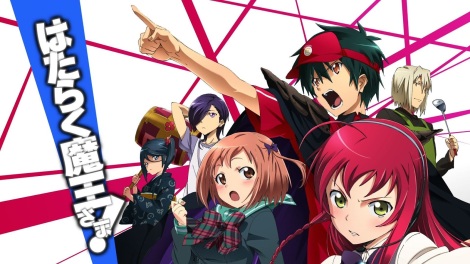 Get ready to laugh.

Just so you know, this is the funniest anime from the Spring 2013 season. In fact, it is the funniest anime that I have seen in a really long time. Hataraku Maou-sama! is an anime from White Fox that is based on a light novel of the same name. It is a romantic comedy that revolves around some demons that get transported to our world. I don’t think that there is anything crazy to tell you guys going in. Nothing overly offensive or sexual exists that would deter people. I will say that you should be ready to laugh in a way will make you look crazy.

Things are pretty hectic in your world. You are the demon lord and a war between your forces and the humans is raging on. Although your forces have done quite well for themselves, a hero has burst onto the scene and is starting to take back the human territory. A showdown has begun and all seems lost for the demon lord. A last-ditch effort has forced you and your trusted general to retreat to an unknown land. Unfortunately, you seem to not be able to use your magic here. So, until you can regain your magic and return to your homeland, you need to make a living here on Earth. Looks like it is time to get a job. That is the premise of our story. Maou has to flee Ente Isla because Emi the Hero was too powerful. Why is this a comedy? Well, Maou works at MgRonald’s in order to support himself and his general Ashiya. Although Maou says that he will conquer both Ente Isla and our world once he has regained his powers, the guy has gotten pretty used to life on Earth. The guy is a fantastic employee at MgRonald’s and he seems pretty nice to the people around him. This lifestyle was working until the Hero shows up in our world as well. What will happen when these two meet?

These are fun people.

We get to meet quite a few very important characters in this series. The range from humans of Earth, to humans of Ente Isla, to angels, and even demons. This is a romantic comedy, so the show is driven by the quality of its characters and their interactions. Luckily, everyone seems pretty interesting and all of them are pretty likable.

Sadao Maou, otherwise known as Lord Satan, is the demon lord from Ente Isla. Although people claim that he was ruthless back home, we don’t really see that here. He is an extremely diligent worker and he knows how to take care of both customers and his employees. Even though he is a demon lord, Maou always seems to be helping people. It is not like he is overly nice. He acts like your average guy. He is kind of lazy around the house, but he doesn’t forget about his old goals. This new attitude does get to Emi at times.

Emi Yusa, otherwise known as Emilia the Hero, is a the love child of a human and an angel from Ente Isla. She is a very proud hero that had to go through many hardships on her way to fighting in this war. Although she has come to our world and observed  the hard-working Maou, she cannot trust him. I wouldn’t trust a guy that is responsible for the deaths of so many people. For those of you that like to label your characters, Emi is basically a tsundere.

Shirou Ashiya, otherwise known as Alsiel, is Maou’s trusted general. The guy takes a very responsible role in the household when the two come to our world. Ashiya the homemaker is pretty funny. Although he can be strict at times when it comes to the use of household finances, Ashiya is extremely devoted to Maou. Also, he has kept more of his Ente Isla personality than Maou, so he acts pretty funny in a lot of situations.

Chiho Sasaki is a human from our world. She is Maou’s coworker at MgRonald’s and this has led to her falling in love with the guy. Chiho is a very happy and energetic high schooler. Unfortunately, being close to Maou tends to get her into trouble. You wouldn’t really know that because she seems to handle it all very well. She only seems in disarray when it looks like someone else is into Maou.

Hanzou Urushihara, otherwise known as Lucifer, is another general from Ente Isla. Although the guy is very evil, his life in our world wouldn’t tell you that. He spends his days in front of a computer ordering things that he doesn’t have the money to pay off and eating snacks while he plays video games. Does that sound familiar to anyone? He ends up getting bullied by the other characters quite often.

Suzuno Kamazuki is a young lady that moves in next to Maou and company. Telling you too much about who she really is would be a spoiler, so just be excited by the fact that there are secrets regarding her character. Although the anime takes place in modern Japan, Suzuno acts like she is from the time of the Shogunate. Also, she excels at housework and taking care of Maou.

We meet other characters along the way, but I decided to cut it off here. Like I said, there are angels and other humans in this story, so you will just have to watch this to find out what’s going on. My favorite character is Suzuno, but you would have to watch the series to know why that it. 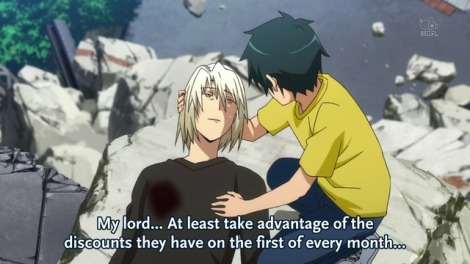 This series is too funny. When you tell someone who you are watching a series about a demon lord that is working at McDonald’s, they react one of two ways. The first is saying that it sounds stupid and they look at you with an expression of harsh judgement. The second is the way that they should react. The concept sounds so ridiculous that they have to watch it in order to see what’s up. I love the comedy and the writing for it is truly the driving force in this series. I can’t tell you how many times my mom walked by and wondered what was wrong with me because I couldn’t hold in the laughter. “LOL” truly holds its meaning in this one. There is also a pretty interesting story taking place in the background. This series doesn’t suffer from the same lack of progression that others so often do. Although the comedy is what dominates the series, I really like the story. The battle animation is actually pretty good. I would say that it should have been utilized more, but I wouldn’t want the action to take away from the jokes. Just enjoy the laughs.

That does not look like a demon lord to me.

You need to watch this series. I don’t know if there is anyone that would read that who wouldn’t enjoy a quality comedy. Hataraku Maou-sama! was that easy watch in the middle of the week that I desperately needed. It was a part of the Spring 20q13 anime season and viewers should understand that it had a powerful line up. Having said that, this is one of the best to come out of that season. Who would I recommend this to? Anyone that enjoys a good laugh. I honestly don’t think that I have anything bad to say about this series on a personal level. Although, I will say that there is one episode that shows up late in the season that people may not enjoy. It basically disregarding the comedy for plot progression. It aggravated most fans and even I can understand why it was upsetting. Unless you are really into the plot, it was a bad episode. Honestly though, if that is the worst thing I have to say about this series, then you have to watch it. You just do.