Episode 01 – “Reunion at the Starting Block”

One of the biggest internet sensations, amongst the anime community that is, has finally been released. Before I start, I’ve noticed that there’s an abundance of…strong opinions about this series, and I’d like to share mine. I’ve always been of the opinion that people can like whatever they want, and others shouldn’t give them shit for it. I also think that people should like things that genuinely interest them, not just to ride some wave of popularity.

In short, like Free! because you’re interested in the source material, not because you feel entitled to counter the male-oriented fanservice that’s persisted throughout anime’s history. I’d be disappointed in you if the only reason you like the series is for the attractive men, much like how I’d be disappointed in someone who only likes a series for pretty girls. On the other hand, don’t hate Free! because a lot of people like it, even if you believe the series to be nothing but fujoshi pandering. Of course, don’t let me tell you how your interest scope should function. 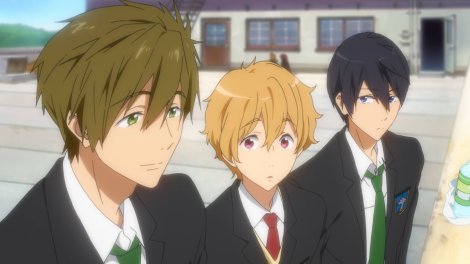 That’s all I’ll say about that business. As for the show itself, it’s surprisingly normal. Though, as a high school anime by KyoAni, I shouldn’t be surprised, nor is that a bad observation to be had either. The story centers around a group of 4 boys who were in the same swim team in elementary school, but were separated during middle school, only to be reunited in high school. The main problem that they now face is one of their friends, Rin Matsuoka (CV: Mamoru Miyano, as in Masaomi from Durarara!!) went to Australia for middle school and came back as kind of an asshole. Oh, and the school that the other three go to doesn’t have a swim team.

The “main” character is Haruka Nanase (CV: Nobunaga Shimazaki, as in Shidou from Date A Live), a serious individual who gets accused of being part dolphin and strips at the sight of any body of water he thinks he can swim in. Makoto Tachibana (CV: Tatsuhisa Suzuki, as in Yuuji from Baka to Test) is the gentle giant of the group, though I still don’t really know what he was carrying that shovel around for. Nagisa Hazuki (CV: Tsubasa Yonaga, as in Teiichi from Tasogare) is the lovable, fun-loving kouhai. There’s also Rin’s sister Gou (CV: Akeno Watanabe, lots of male characters in flashbacks) which happens to be a boy’s name. All of the main characters have common female names, and I’m not sure if that’s supposed to subliminal messaging or what.

The animation is top-form, as expected. I love all of the character expressions, like when Haruka’s eyes glistens every time a chance to swim arises. I also love the quaint countryside aesthetic and the soft colors that are used for the backgrounds. The BGM is in a category all on its own. It’s super varied, from a chill disco jive to dirty drum and bass beats. The latter reminds me a lot of the BGM from Kuroko no Basuke.

I’ve enjoyed what I’ve seen so far, and it’s a great way to cool off in the summer heat (or heat up depending on who you are, I guess). Next week, we may find out why Haruka only swims freestyle, and maybe Gou will put together a swim team at their school to compete against her brother?