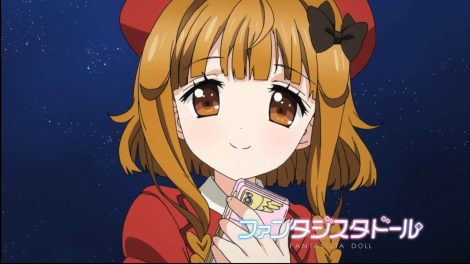 So out of mere happenstance (i.e. I choose to), I’m doing first impressions for all of the mahou shoujo-esque anime this season. After the rather dark first episode of Gen’ei wo Kakeru Taiyou, we’re treated to a more light hearted introduction with Fantasista Doll. Interestingly enough, both series involve girls who use cards to do battle, and both are shaping up to be pretty good in my opinion.

In Fantasista Doll, we have Uzume Uno (CV: Ayaka Ohashi, Fleur in Eureka Seven AO), a middle schooler who happens to be a master player at a card that looks suspiciously like Magic: The Gathering. One of her classmates even makes a quick reference to the card game in the episode, calling it “Magic: To Gather.”

As expected, middle school life begins normal enough for Uzume until a mysterious girl approaches her to form a contract with her and her companions. Since Uzume’s being chased by a shadowed figure at this moment, she doesn’t really have much of a choice in the matter. Though it does beg the question of who would you trust in this situation? The mysterious girl is probably little bit more trustworthy, even if she is asking for your three sizes. 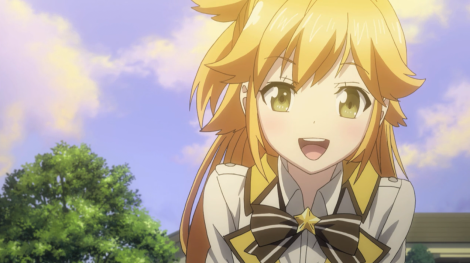 The mystery girl turns out to be Sasara (CV: Minami Tsuda, Yui from Yuru Yuri), a Fantasista Doll that appears before Uzume in order to save her from her attacker who turns out to be another girl who can command dolls. Using a special phone and cards, Uzume powers up Sasara with one of the cooler transformation sequences I’ve seen in my day. I don’t know what it is about it, but I think the trains acting as a moving wardrobe are the most ridiculous yet awesome things ever

After Sasara uses her rapier to beat up the other girl’s kunoichi doll, she begs Uzume to let her help even though she’s a bit vague about the whole thing. To make matters even weirder, the rest of the dolls suddenly appear in Uzume’s house and take a group bath with each other. Uh huh…Oh yeah, and there’s the creepy Tuxedo Mask lookalike, too.

This series isn’t really what I expected, but then again I’m not sure what I was expecting to be honest. It still seems like a really fun series to just watch though. The premise of card battles is too enticing for me to give up. But, some reservations I have about the series thus far are the animation and pacing of the plot. The character designs are nice, but the overall animation values are average at best. Also, the plot pacing feels all over the pace. One second we’re at school fighting and the next we’re taking a bath with everyone, all without any real explanation. Still, I look forward to the next episode to see what happens next.