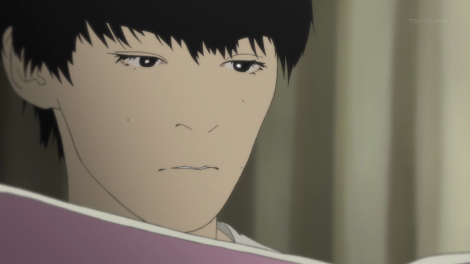 I have a pretty good idea of where the series is now going. I should’ve seen it coming, but Takao now seems to be in love with Nakamura. I guess it was inevitable since they were both labeled as “deviants” from the very beginning. It’s still really surprising though, considering all of the mental anguish that she’s put him through from the beginning. Yet he’s managed to push aside his feelings for Saeki and fell in love with Nakamura instead. What a world.

It turns into a desperate plea for him to listen to his apology. He tracks her down after school to apologize with a letter he wrote. She continues ignoring him, but he chases after her while trying to read her his apology. First off, that’s pretty creepy in its own right. I’ll even say that’s borderline stalker material. I think anyone would be creeped out by an ex-boyfriend chasing after you with an apology letter. Nine times out of ten, I bet my money that any sane girl in that situation would run away as well.

Does Takao back down? Nope. Desperate to try and understand Nakamura’s feelings, he manages to track down her address and is invited inside to meet her father and grandmother. Remember how I keep saying that Takao is hard to like and gives off a weird vibe? I’m getting that even more with his recent actions. I don’t remember him being this assertive towards Saeki, ever. Even when he went to Saeki’s house to try and talk to her, it was under the pretense of giving her the handouts that she missed. And even then, Nakamura had to ring the doorbell for him.

So now that he’s met her family, what’s he supposed to do? It’d be too weird to give them his apology letter and have them deliver it to her. They seem so normal, it’s hard to believe that they’re related to the foul-mouthed red head that’s been on Takao’s mind. In fact, everything about their home seems fairly normal, although the lack of a mother would be enough to suspect that as a reason for Nakamura’s personality. 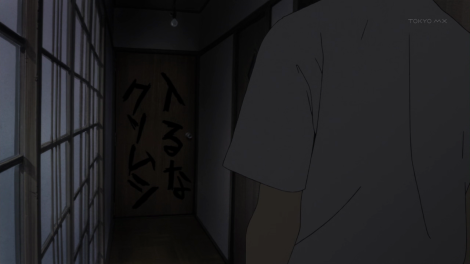 Please ignore what I said earlier about how normal her home seemed to be. Especially after seeing Nakamura’s door. It looks straight out of a horror movie. What could possibly be beyond the threshold of that door? What answers to Nakamura’s own psyche lie behind it? Takao’s desperate need to understand Nakamura has lead him to this door, and I’m almost afraid to know what’s inside.