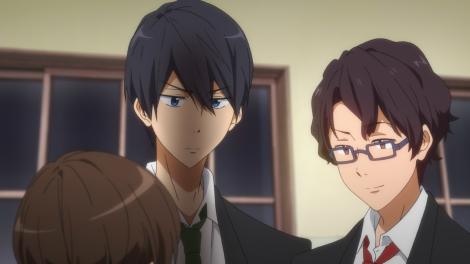 So I guess I was wrong in my previous impression when I said my prediction was wrong. To set the record straight once and for all, Kou joined the swim club to be the manager (like I had first predicted). . Or you know, just to see her swim at least. This episode, the three childhood friends begin to get desperate as the club requires a fifth member to be able to do anything remotely official, like use the club funds to pay for indoor pool usage in the off season. Now who could possibly want to join?

Another boy with a feminine name, of course! At least, that’s Nagisa’s modus operandi as he searches out a perfect candidate. In his quest, he stumbles upon Rei Ryuugazaki (CV: Daisuke Hirakawa, Makoto from School Days), a pole vaulter who uses the magic of physics in his jumps. However, his coach tells him that if he relies on calculations to do his jumps, he’ll never improve. It’s an interesting philosophy that they each both have, but the coach is right. There are things, like heart and spirit, that math simply can’t account for in sports.

In the end, Rei officially joins the swim club (after an embarrassing show of not being able to swim). He’s essentially the complete opposite of Haru, who does everything by sheer intuition. One’s like a robot and the other is like an animal. Rei sees something beautiful in the way Haru swims, and I must agree. And not just with Haru, but with everyone. KyoAni has really outdone themselves with the animation, as it looks (arguably) looks better than real swimming in a lot of ways. Also, the title of the series makes much more sense now. Sure, we all knew that it referred to freestyle, but it’s also representative of the “free style” of swimming that Haru does, which is something that is completely natural. Soul swimming, if you will. 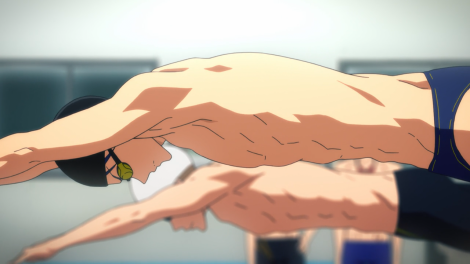 As for the whole fanservice argument, I think anime will always rely on it to garner a bigger audience, and now, the anime industry has proven itself capable of appealing to both genders. Still, I can’t see why a girl who has zero interest in sports or swimming would want to watch Free!. Also, in terms of what’s “worse” between traditional male-directed fanservice and what’s seen in Free!, I would say one is definitely more realistic than the other. With ridiculously proportioned anime girls, they’re so hyper-idealized that I’m pretty sure no one in their right mind (man or woman) would or should expect real women to look like that. With the guys in Free! though, there are (lots of atheltic) guys in the world who look like that, and I guess guys feel threatened and insecure about themselves. Still, shout out to those real life buff guys for being fine and taking care of their bodies. Definitely, much more than I can say about myself.