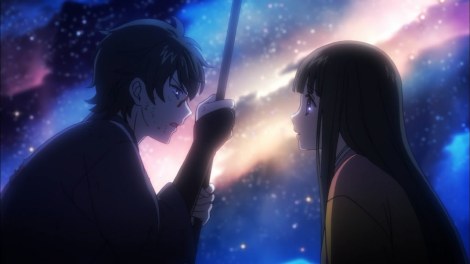 I like a good serious anime that dabbles in the supernatural. I don’t mean that it has to be a series with a lot of action and people using supernatural powers to fight each other, but I also like a show that takes this kind of stuff seriously. Japan has a rich mythology that spans centuries, and even today there are superstitions that survive in modern Japan. RDG: Red Data Girl is a series that blends a modern Japanese society with the supernatural mythology of old folktales. It’s no Monogatari, but it’s still a finely constructed series nonetheless.

RDG stars Izumiko Suzuhara, a young teenage girl who is raised in the mountains with the local monks. A very quiet and shy girl who grew up in a sheltered lifestyle, she has the mysterious power to destroy any electronic device she touches. Not only that, she is a spiritual vessel meant to channel a powerful Goddess, and is possibly one of the last remaining people in the world with such a power. Her guardian Yukimasa Sagara assigns his son Miyuki to be her guardian. Although their relationship is rocky, that bond is put to the test once they enter Hojou Academy, a school where students with spiritual powers vie for dominance and a chance to acquire the title of “World Heritage Candidate.” 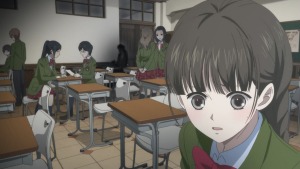 Izumiko starts off as a very shy and meek girl, and this series follows her on her journey to overcome her shyness. Indeed, the girl we are introduced to in the very beginning can hardly speak up for herself, something her guardian Miyuki can’t stand. As the show progress, we see her step out of her comfort multiple times as she ends up in situations dealing with the supernatural. I’m a sucker for shy characters like her, so it was great to see her slowly gain confidence in herself throughout the series. 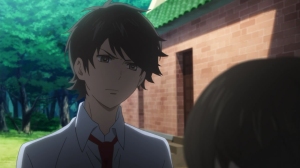 Let’s be honest: Miyuki is a complete asshole when he is first introduced to the audience. For a 15 year old, he sure doesn’t mince words and is quick to voice his displeasure. In fact, it’s tough to like him because of the way he treats Izumiko as if she’s a nuisance. And to think, this is the guy we’re supposed to expect fall in love with Izumiko. Their chemistry is very nonexistent in the beginning, but over time they learn to tolerate each other and come to a mutual understanding.

Other side characters aren’t given nearly enough time to be developed. The Souda triplets Mayura, Manatsu, and their deceased sibling Masumi become close friends to Izumiko and Miyuki. Having supernatural powers of their own, they wage an intense rivalry with Takayanagi, the other top student who wants the title of “World Heritage Candidate”. I felt that we weren’t given enough reason to care about these characters because they had such vague or shallow motivations. We’re left in the dark for the most part about why gaining the title of “World Heritage Candidate” is so important,but it’s implied to be something of great significant and benefit to the person selected. Other characters such as Jean Honoka Kisaragi, Hodoka Murakami, and Yukimasa all play an important role in this overall conflict, but their motivations are left vague and we don’t get a clear understanding of their personality. 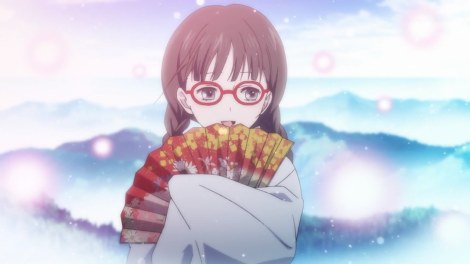 The series threw around a lot of concepts that are interesting. They really wanted to fuse old Japanese mythology into a modern 21st setting. I liked the ideas of old Shinto folktales and spiritualism that they used in conjunction with the students. It’s nice to see a series that takes its subject material seriously. Never once does it indulge in needless fanservice and unnecessary filler. From beginning to end, it keeps a very consistent theme. 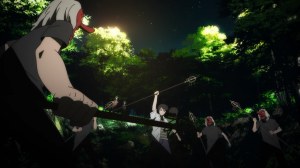 Ultimately however, having so many plot threads proved to be the downfall for this series. There were simply way too many subplots going on and not enough time to let them fully develop. Some things go completely unexplained, such as Izumiko’s power to destroy electronics. It seemed like a such an important plot point in the early episodes, but the subject gets completely forgotten until the last couple episodes. Some stakes seem nonexistent, especially the danger of the Goddess destroying mankind. We see no proof of that happening, and we never feel as if our characters are in danger.

Oddly enough, there were spots where the plot starts to drag and get really boring. I didn’t care at all about the Souda triplets, even though there was an entire arc focused entirely on them. It’s partly due to the fact that there’s a lot of confusion regarding their deceased sibling Masami and how he ties into everything. Sadly, the element I felt was the biggest let down was the conflict between Mayura and Takayanagi. It never feels like there are serious stakes. I liked that they made it more political instead of all-out brawls with supernatural beings, but it doesn’t get a solid resolution by the end. 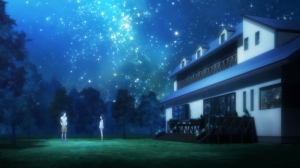 Thankfully, P.A. Works did an excellent job with the animation. It was very fluid and the quality never seemed to drop with each new episode. The character designs were nice to look at and a lot more realistic than most other anime. It at least didn’t try to pander to a male audience with cheap fanservice. Everything from the scenery to the people were nice to look at and I think P.A. Works nailed that bit by keeping it professional.

The series had a lot of potential that it simply wasn’t able to live up to. Looking at the bare basics, the series is about Izumiko overcoming her fears and growing up into a strong woman. It’s a solid coming-of-age story with an otherworldly touch. However, the writing really suffered with confusing plot threads and underdeveloped side characters. The series had a lot going for it from the beginning with great visuals and an interesting plot, but unfortunately didn’t quite live up to expectations. It’s a solid story nonetheless, even if it’s fine with settling for a quick and happy ending. 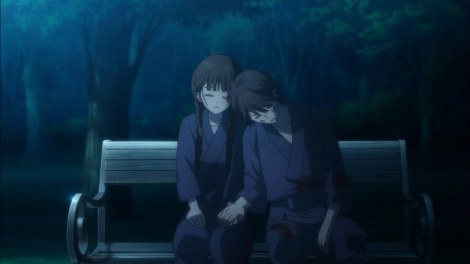