Do you know what truly surprised me about this episode? We found out that female demons actually exist. I would say that Sitori is no longer the most feminine demon, but he probably still is. Oh well, don’t expect everyone to be a guy.

This story took up way too much time.

An unimportant side story took up a good portion of this episode. What was going on you ask? Well, the head boy has a special task for William. Apparently, there has been some rowdiness going on that would reflect poorly upon the state of the school. The headmaster is on his way over for a visit and nothing is allowed to go wrong. It is because of this that William has been tasked with stopping these hooligans. Although it is seen as an opportunity to get in good with the higher-ups, this was actually just Camio dumping the task on someone else. The ruckus is happening at an old mill that is set to be replaced with a new school building. It turns out that the singer is a goblin that needs to mill in order to survive. Luckily William figured out that he could send the little guy to India. He works for Isaac’s dad at the tea factory as a spice grinder. Unfortunately for William, the praise from the headmaster goes to Isaac because his dad made a huge donation to the school. Better luck next time William. Oh yeah, and Kevin is supposed to be a dangerous entity that Dantalion needs to keep an eye on.

I am not used to demons entering churches so easily.

Once again, I feel like we got an episode that didn’t really matter. I know that a few of the things that we saw, such as the talk between Kevin and Dantalion, were important, but that wasn’t really a focus of the episode. What we got was a story about a goblin that lost its purpose in life and a stupid solution to something that should not have been a problem. Does no one care that the worker at the factory is obviously not human? Last week we got the cliché romance story that will probably not end up being important either. I am curious as to why they are spending so much time on things like this when there is an actual story that is being written. If the manga comes out on a monthly basis like a lot of shoujo series, then it will never end at this rate. Having said that, the reason I am talking about time like that is based on the assumption that we will eventually meet all seventy-two pillars of the demon world. Given, we could meet groups of them at a time, that is still a lot of people. 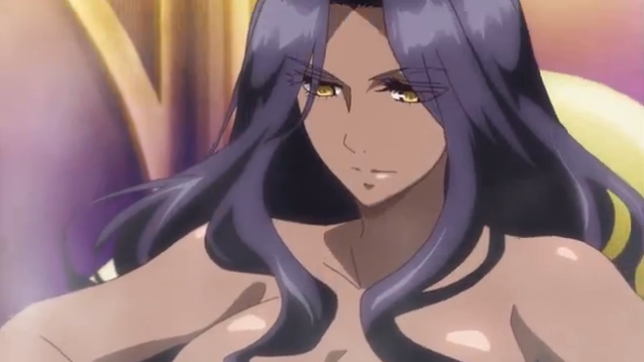 That is a woman.

Even though we have seen these images in the ending theme and whatnot, one cannot assume that such characters are definitely females. I think that Astaroth and Lamia could be important moving forward, but that is only because they are connected to Dantalion. I don’t think that the “engagement” Lamia is talking about will be a thing, but we will probably be seeing her again. The thing of interest here is definitely Kevin. Astaroth seems to know about him and there is definitely something mysterious about him. He is a member of the church, but Dantalion may have revealed a lack of affinity for the holy arts in our steward. Then you have the scene from a while back that showed Kevin looking at the ring of wisdom. Kevin knows about the ring and I want to know what is up with that. Hopefully that happens soon because the first season of this series will not be very long and I don’t feel like sitting through another throw away episode.

Another false promise made to a child.