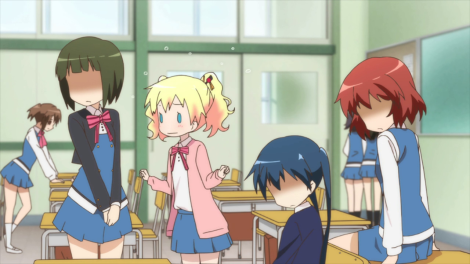 Well I can’t say I didn’t see this coming.

After such a wonderful first episode, things have pretty much gone down to generic slice-of-life levels. It’s such a waste, since that first episode had such high production values and had a really interesting story in the prologue alone. Seriously, I can’t express enough I much I really liked that opening prologue in Episode 01. It had top-notch animation, a great score, and an interesting  story all right there. Studio Gokumi should have just used their entire budget making this a full-length feature film. 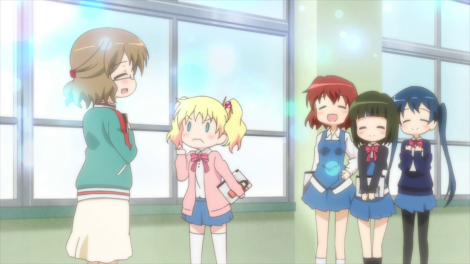 Still, it’s not a bad show by any means, it’s just that it’s now pretty much exactly like every other slice-of-life show. The first half of this episode focused on character introductions, introducing us to our supporting characters as well as reintroducing us to our main heroines. The narration comes in the form of Alice, who throws in her own little comments about each character. I’m guessing that we’ll be following Alice’s perspective throughout the series, which I think is a welcome idea. If they can keep that consistent, the writers will have ample opportunities to use her unfamiliarity with Japanese culture for some good comedic bits, and maybe even allow for some character development. 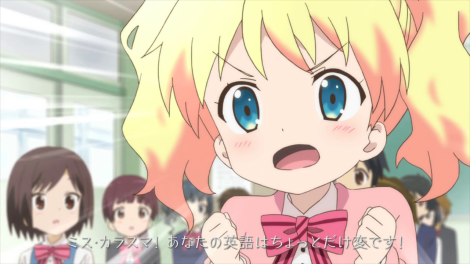 “Miss Karasuma, your English sounds a little awkward!” Speak for yourself!!

One thing I think is crazy is that despite doing a homestay in England several years ago, Shino still doesn’t know how to read or speak English. I don’t know whether she’s too dumb to pick up another language or too lazy to bother studying it. It’s weird since she seems to show a slight obsession with European things. You would think that in the time between her homestay and the present day, she would’ve at least picked up basic conversational skills. Even Alice learned Japanese, and she sounds ridiculously fluent! Not only that, it makes you wonder why she even did a homestay in England if she didn’t bother learning any English. Did she just expect to depend on Mrs. Cartalet for communication during her whole stay? (Okay, I admit, learning a new language is time consuming and takes considerable patience to learn. I call myself a Japanophile, but even I can’t speak Japanese outside of a few phrases.) 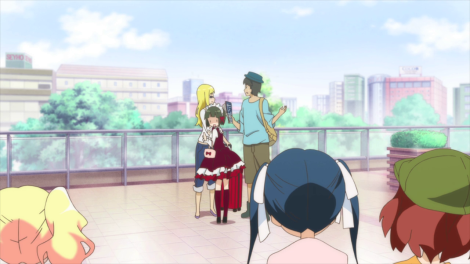 Owing in part to its origins as a 4-koma series of comics, the story jumps around to various bit-sized comedic scenarios. There’s an amusing scene during English class, Shino’s attempts to interact with some foreigners, and a misunderstanding revolving around the girls believing Alice to be homesick. Again, typical slice-of-life fair when it comes to stuff like this. It’s really lighthearted and there isn’t a big overarching plotline that I can see, which can be a good and bad thing. If you love watching cute anime girls talk about everyday life with a comedic twist, you’ll find a lot to enjoy. 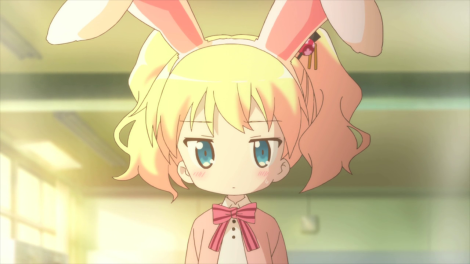 But once again, they could’ve done a lot more if they gave it an actual conflict for the characters to worry about. Perhaps they could’ve focused more on Alice and Shino struggling to make their friendship work despite their cultural differences. Unfortunately, that was pretty much averted the moment the time-skip occurred and Alice suddenly knew Japanese. If they had just one strong central conflict throughout the series that would show their growth as characters, then this show would’ve been so much more. 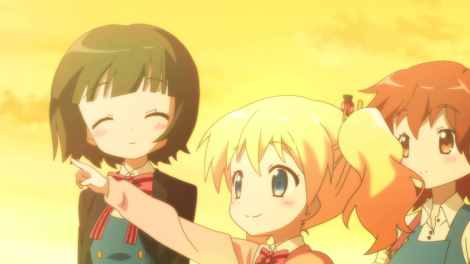 That last joke made me chuckle for some reason. Some people just don’t know how to read the mood.