I really wish this was a full-length movie instead.

I’m no stranger to the slice-of-life genre. After all, it’s probably the most common type of anime that you will see. It’s a concept that easy to produce and can appeal to a wide demographic. It’s a fact that I keep bringing up because so many shows of this genre are put out every season. So why did I end up enjoying this more than I did Kitakubu Katsudou Kiroku? First, let’s start off with a bit of prologue… 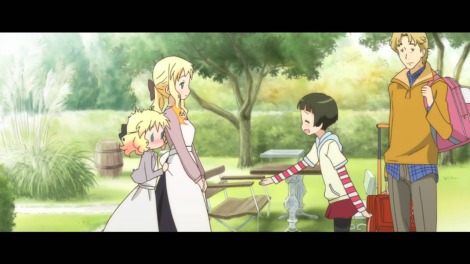 Kiniro Mosaic begins with Shinobu Oomiya (Asuka Nishi), a young Japanese elementary student who goes to England as part of a homestay program. She ends up staying at the beautiful countryside home of Alice Cartalet (Manami Tanaka), a young English girl her age, along with Alice’s family. During her stay there, the two eventually grow close despite their language barrier. Years afterward, a now teenage Shinobu discovers, to her surprise, that Alice has transferred into her high school and is now fluent in Japanese.

That’s pretty much all the setup you need, and the show could have simply started from this point. We can already see where the show’s comedy is going to lean, with both girls struggling over their cultural differences. It’s a concept that I like, mainly because we don’t get to see that a lot of interaction between Japanese folk and foreigners in anime. Usually, it’s done for a quick joke or the foreigners are incredibly stereotyped. (Half the time, foreigners are poorly illustrated!)

So what struck me is how well they handled the culture shock between England and Japan. Any low-brow production would have simply slapped British flags, tea time, and Big Ben in our faces to remind the audience that we were no longer in Japan. However, they took the high ground and focused on the language barrier between Alice and Shinobu, who can’t communicate outside of saying “Hello” and “Konnichiwa”. Surprisingly, the English was really well done by the Japanese actors. Aside from some awkward enunciation (especially from Alice’s friend), the seiyuu did an above-average job of portraying English-speaking characters. Kudos to them, really. 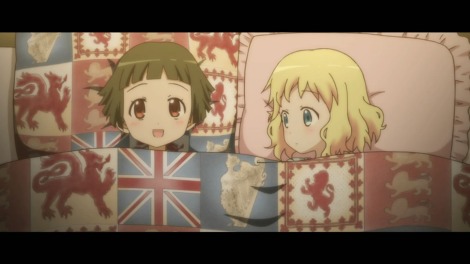 As for the whole prologue, I can’t stress enough how wonderfully executed itself. The first 15 minutes are just a prologue to the main events of the series, namely Alice coming to Japan to go to school with Shinobu. Like I said earlier, they could’ve simply started with them entering high school and gone from there. But by devoting nearly the entire episode to their childhood meeting, it creates a believable bond between these two characters and we, the audience, become more emotionally invested in their friendship as a result. Kotoura-san may have had one of the most depressing prologues ever, but Kiniro Mosaic has one of the most heartwarming prologues I’ve ever seen.

Which is why I wish this was just a full-length movie instead of a series. I can already tell that this will be a slice-of-life the moment they shift the focus to their high school life. I mean come on, it’s an anime set in a Japanese high school centering around cute girls doing cute things. It’s either going to be a slice-of-life, an action comedy, or a horror series; there’s usually no in-between here. Still, the whole series could’ve been about their childhood and I would’ve been onboard all the way. Everything from the beautiful animation to the cinematic widescreen presentation to the pleasant score was just about perfect. It was an incredibly heartwarming tale of two people bonding despite their cultural differences and language barriers. 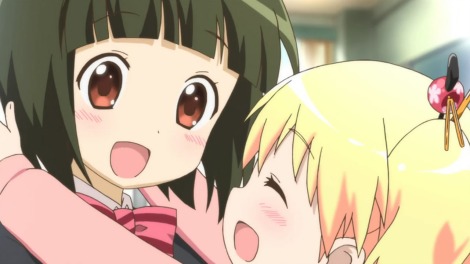 I’m gonna stick with this one to the end because I really want it to be something more than just a slice-of-life. It showed great potential in the opening 15 minutes with its tale of culture clash and the universal power of friendship. All the pieces were there to tell a heartwarming story that would have instantly set it apart from a lot of the anime out there, so I hope they don’t just fall back on generic slice-of-life comedy. It’s been overdone a thousand times already, and this one can least dare to be different. While it does look like we might not see that same cinematic potential in future episodes, I still hope the rest of this series can make me feel all warm and fuzzy inside the way this episode did.