As a big lover of fantasy settings, I can say that I’m really excited for the next anime season. Even if we aren’t getting a bunch series with knights shining armor (there’s one, but not what you would expect), there are fantastical elements in just about everything the new season has to offer. The anime industry has this weird thing where it likes to reimagine familiar concepts into new, yet easy to relate to, settings.

So whether you want to see hot vampires, fighting dolls, or just people fighting with superpowers in general, I think Fall 2013 is going to be a good season. Oh yeah, there’s a bunch of romance and some sports for us too, for those times when we’re tired of saving the world. 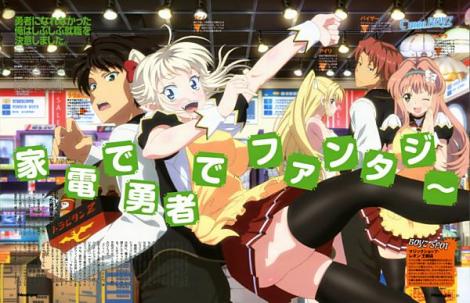 So this mouthful of a title translates to something like “I was not used to ways of the hero, so I decidedly to work reluctantly.” The main character was preparing for Hero exams in hopes of defeating the demon lord, but was a bit too slow. Thus, he is unable to get his Hero license and is forced to work part-time at a magic shop. How unfortunate and oddly familiar. It’s sure be hilarious, though.

Just what every girl dreams of, I’m sure: being surrounded by six handsome vampire brothers. Vampires have always been the masters of seduction, so it shouldn’t be surprising that entertainment media loves to use them. An interesting twist is that the main female character’s school is for entertainers and celebrities. I imagine it’s like a really bad MTV show. 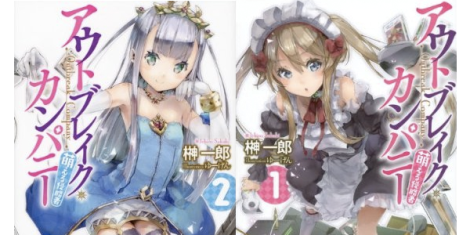 Definitely one of the most ridiculous concepts I’ve ever heard of. An otaku is caught up in a war in a parallel while out on a job as a “moe evangelist.” Just the tern “moe evangelist” makes the whole series sound brilliant. Who needs to spread religion when you can just convert to the way of moe?

Set in a most curious world that is neither land nor sea, but a combination of both. Imagine living in a place where fish swimming around in the air is commonplace. This original tale promises to be quite interesting and will showcase the expected gorgeous P.A. Works backdrops.

Riding off the coattails of the likes of .hack and Sword Art Online, we have a new breed of reality online gaming. This time, 30000 gamers are trapped in a fantasy world known as Elder Tale and have fight to survive. Sure, it sounds like the same old song and dance, but there’s a cat with a cape and rapier!

It was only a matter of time before a wrestling anime surfaced, but who would have though it’d be like this? Of course, busty singing wrestlers probably doesn’t sound like the worst thing for some anime fans. One of the draws of this series is the menagerie of talented and popular seiyuu. 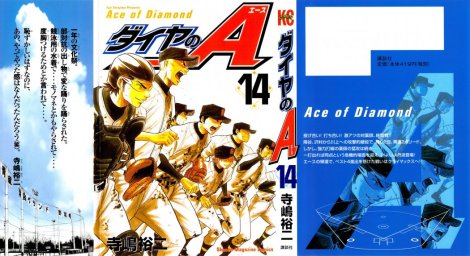 It’s hard to find a serious sports anime that’s not riddled with BL overtones. While this series may not stray far from this stereotype, I think it’s been a while since we’ve seen a baseball. Also, with Madhouse and Production I.G. behind the animation production, there should be some intense pitching and catching scenes. Wait…what?

Every kid’s dream is about to become a reality with this new Gundam series. In this story, kids get the opportunity to bring their models to life and compete in tournaments against each other. Who cares about defending the planet when you can kick your friend’s ass in GunPla Battles?

With forces from Tengen Toppa Gurren Lagann and the Evangelion movies, we have an interesting action series coming our way. Centering around a school of battling schoolgirls, one which of wields a giant half scissor, this promises to be quite, well, bloody?

Handsome guys who wear glasses. That’s it, that’s the show. Quite the prerequisite for a club, if you ask me (which you probably wouldn’t). With a series whose focus is on the male eye candy, I wonder if Studio DEEN will be able to pull it off. They’re no KyoAni with Free!, after all.

This is something I’ve been keeping tabs on for a while because I really like the steampunk setting of it. It revolves around the craft of automaton creation, known as Machinart, and a young man who wishes to become a master puppeteer. The only reservation I have is the fact that Lerche is handling the animation.

A nice cute and quaint series that takes place out in the countryside, where there are literally only a handful of students that attend the school. The main character is a transfer student, who will probably experience some understandable culture shock. The most interesting thing to me is the relatively wide age gaps between all of the girls.

A completely original anime series centering around three supposed female descendants of the famous Italian astronomer, Galilei Galileo himself. Referred by the world as the “three moons,” they’re put on a international wanted list. The mystery behind the whole plot has me intrigued.

This game’s main character is just your average Joe. We love those, right?! Coming from a long line of occult practitioners, he oddly lacks the ability to see spiritual energy like his predecessors do. Oh yeah, there’s a childhood friend, from the main family, that the main character reunites with, too. Does that make them cousins, though?

Natsume Yuujinchou, anyone? Anyone who likes series with youkai and traditional Japanese mythology will most likely find some interest in this anime. The main character is a shrine maiden who encounters a fox spirit who acts as an intermediary with the gods and youkai.

Everyone sport deserves an anime now! This time, we have cycling (which would probably be my sport of choice, if I had to choose). The main character becomes competitive because of all his practice biking 90 kilometers to Akihabara to satisfy his otaku needs.

After losing much of the world’s usable land due to global warming, domain over the oceans has taken utmost significance. Fleets wielding superweapons vie for control of the oceans against the mysterious “Fleet of Fog,” which threatens humanity’s very existence. The only thing I don’t really like is the use of CG, but it’s become an unavoidable evil.

From the wonderful mind behind Toradora!, we have a rare love comedy setting in college. As much as we all “love” high school drama, it’s nice to see some more (possibly) mature characters. It’ll be interesting to see how the issues we’re used to seeing in high school love comedies are altered in this different setting. 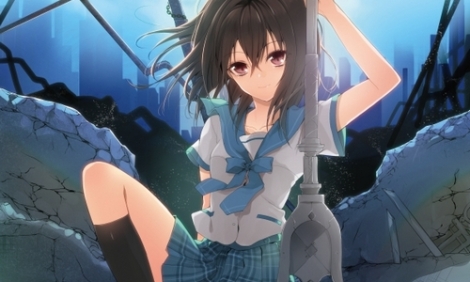 This supernatural story appears to star not one, but two super powerful heroes. One is a boy who is considered to be the strongest vampire, and the other is a girl who has been charged with looking over him. If the need arises she must hunt him down, with her marvelously large spear.

KyoAni’s latest story has a bit of dark supernatural flair to it. Based off of a light novel series, this tale centers around a half-human, half-youmu boy and a girl who can control blood. Despite the ubiquitous high school setting, it’s definitely nice to see KyoAni branch out into more supernatural territory again.

Set in a time where nature has reclaimed a formally industrialized Tokyo, a team of three high school girls are employed in an elite special forces unit. Because of nuclear radiation throughout the now dead city, the girls have been genetically modified. I’m liking the action that I’m seeing, and I hope the animation quality will be able to accommodate all of the ambition scenes that want to happen.

Now here’s a hilarious concept: a high school boy is cursed with the power of “absolute multiple-choice.” This means that he can control his future by simply picking one of the choices in front of him. While this sounds deep and metaphysical, he typically gets choices like going to school naked from the top half or bottom half of his body. This is a fresh new scenario for your typical school love comedy.

So I think this is like round three for this series. This time, it’s a retelling of the very first season and will hopefully be a “definitive” version of the story. The series stars a team of teenage heroes with psychic powers: one girl can read minds, another girl can conjure, and another girl is just really strong. Oh yeah, and there’s a powerless boy in the group too that helps protect the city with the girls. Does this sound familiar to anyone else?

This series is an adaptation of a pretty nice looking adult visual novel, and I’m not just saying that because I think girls in uniforms are cool. I can say this much though, I don’t think we’ve ever seen an anime about jousting though. Interestingly, the main male protagonist actually doesn’t participate, due to an injury, and instead assists the female main characters in the competitions. 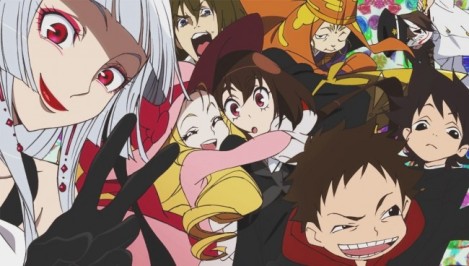 After finding themselves trapped in a odd city, three kids seek out a mysterious rabbit in order to return home in this Lewis Caroll-esque fantasy adventure. This series’s ONA received positive, if not quiet, feedback from viewers, especially for its unique animation style. I’m really glad its getting a proper anime series because I’ve looking for an excuse to watch it. 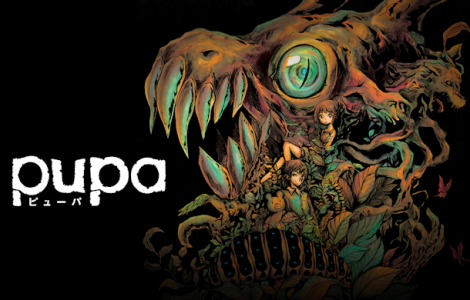 So I was wondering when we were gonna get something grotesque this fall. The story centers around a brother sister pair who live alone by themselves. Everything’s fine and dandy until the sister metamorphoses into a horrific creature that devours humans. I wonder if it’ll be a psychological mind trip like Gregor Samsa’s metamorphosis.

Based off of the popular (and difficult) fighting game, we have something that many fans have been eagerly awaiting. Despite it being a fighting, I hear that the story is nothing to sneeze at, and we’ll get to see it adapted in full animated glory. Of course, adaptations of video game stories are always tricky business, so we’ll have to cross our fingers for something good.

Actually not a sequel, but the second game in the franchise by Leaf, this series looks to be quite…melancholy. Instead of having a huge cast, we have one male protagonist and his relationships with two girls, one of whom is in the school’s light music club. I tend to shy away from dramatic romances like this, but I’m sure a lot of you will enjoy this series.

Pocket Monsters: The Origin  (Production I.G./Xebec) – Genre: Do I have to say?

Now this is something that I’m sure no one was ever expecting, but I think most everyone will welcome with open arms. We are finally getting a proper adaptation of the original Pokemon manga. This way, everyone from the purists to those wanting something more mature are pleased. I kinda just want to see Arboks get chopped in half.

We mustn’t forget the sequels coming out, either: