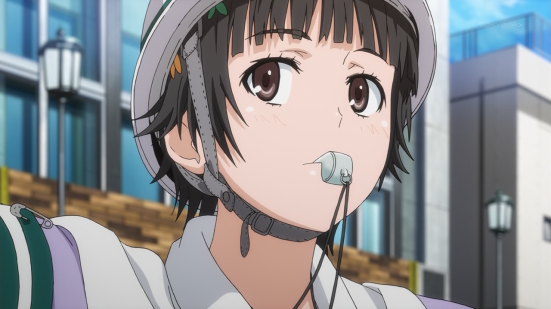 Just when you thought you’ve seen the last of ITEM in Railgun S, here they are again! This time, they’ve been employed by a group of scientists to serve guinea pigs more or less. They’re pitted against an army of robots so that the researchers can gather data about their abilities, particularly those of the Level 5 in the group, Mugino. Apparently, things go well except for a small hiccup, and I wonder if they’re referring to Mugino accidentally getting a scratch in the test. I also wonder what use Frenda is if she doesn’t get to booby-trap the whole place beforehand. I suppose she has those Banzai Bills underneath her skirt.

In typical Raildex fashion, there’s a ton of simultaneous things going on. In this case, Haruue’s friend, Edasaki, is finally being released from the hospital after being there since the first season of Railgun. Consequently, Haruue’s moving out of Uiharu’s apartment so that she can live with and take care of Edasaki. This creates some bittersweet feelings for Uiharu, who’s obviously sad to see her good friend move out. However, Haruue feels obligated to pay forward the kindness she received from Uiharu to Edasaki. And these feelings come not from Uiharu being a Judgment member, but as a friend.

We also have Kongou taking down bad guys in a badass, ojou-like fashion. However, she gets berated by one of the mysterious scientists behind the ITEM experiments. I’m very curious as to what their true intentions are. Surely, they wanted to cause some sort of opposition against espers, but I want to know why, how they plan on doing, and where ITEM fits into all of this. Also, Nunotaba is alive! But she’s on the evil scientists’ side, so I don’t know what to think!

To top of the whirlwind of events this episode, Misaka and company stumble upon a cute little girl with blonde hair with barely the ability to say anything but Misaka’s name. Though, it’s anyone’s guess as to why she knows her name, really. I’m very excited to see how all of the pieces of this puzzle will fit themselves together, as my favorite show of the year continues to trek forward and onward. An aside: I swear that the animation just keeps getting better and better with each episode.