What did this series need? There are a few answers to that question, but if you said that you wanted more fan service, then you got your wish. I technically got my wish for more parody as well, but it came at a price. What did we get this week? The beach episode. Make sure that you watch this episode with your back to a wall and don’t forget to use headphones. 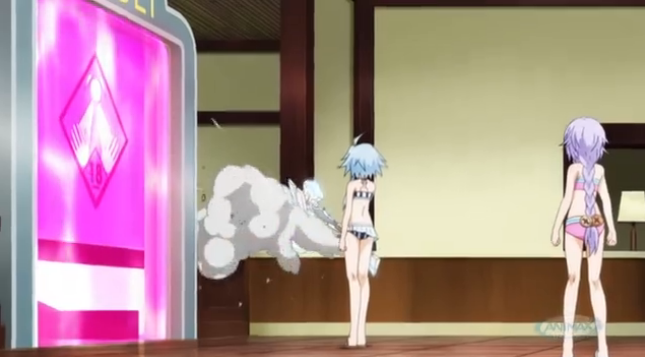 Blanc was not happy.

The gang had to head out to R-18 Island for a very important mission. Although they were sent there to check out some heavy artillery that was left there, it seemed like their mission was to be pornographic. R-18 Island is exactly what it sounds like. A very adult island with a strict dress code that says you must either wear a swimsuit or be nude. The goddesses chose to wear swimsuits, but Blanc and Plutia were almost denied entry due to their breast size. Blanc had to break her way in to avoid questioning. When the group got there they were greeted by the accomplice of the pedophile from Super Retro Land that turned out to be a girl. That was unexpected. The group ended up playing on the beach for a while and a few of the girls tried to trick the others into stripping. It worked on Nepgear. After some basic playtime and Neptune getting drugged, Plutia transformed to beat their way to the artillery in question. It was being used as a bubble machine, but the appearance of a certain transvestite is not sitting well with Noire. Back at Planeptune, P-ko was taken by someone who claimed to be her mother, but was really the transvestite’s accomplice. Something is going on in the background. 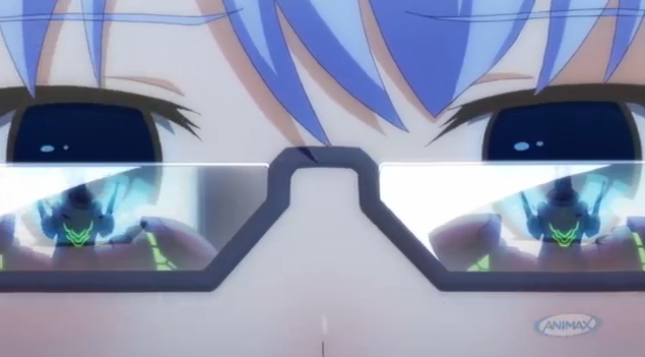 I wonder what this girl has gotten herself into.

I think that the series is headed in the right direction. We had that good parody that I was looking for. I may not be the biggest fan of fan service, but I definitely liked the references put out there. What else did I like? The progression of some kind of problem in the story. P-ko, who is obviously the person from Plutia’s dimension, was kidnapped essentially by the transvestite. What could their plan be? Obviously, P-ko is related to a great deal of energy being released, so they may use her to power something, but I wonder what. It could be the canons on R-18 Island for all I know. I am hoping that we don’t skip out on this issue in the next episode and that something is actually done about it. I want to know what their overall plan is. I assume that they are not related to the last villain, but I do think that they have similar goals. Removing the goddesses from their position of power and assuming the same role for themselves is a pretty common villain plot. Plus, that girl did protest the goddesses in the first episode. 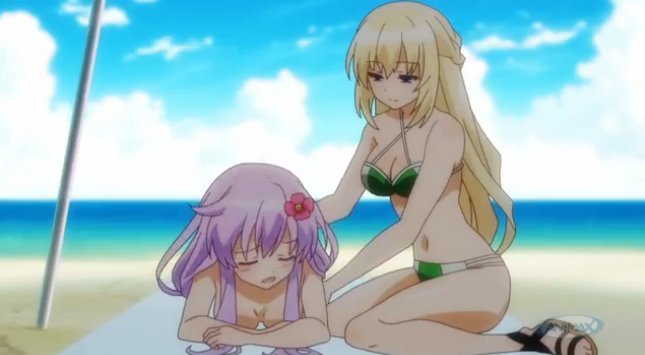 Can we talk about how Vert is totally trying to get some from Nepgear? Honestly though, she is praying on Neptune’s little sister. The attachment has grown since the hug after the anti-crystal encounter and we are seeing where things are going. Vert seemed pretty pleased when Nepgear stripped down to nothing on the island. Also, that is not how you apply suntan oil to someone’s body. I don’t think that you see that outside of things that would be rated R-18. Are they really going to make this a thing? Is lesbianism the only way to go in this series? Where are the actual guys? How the fuck do you make children in this series? There have been references to a family system, but no human males to speak of. The mouse was a guy, but I doubt that would work out biologically speaking. Then you have the transvestite that should hardly count in this situation. Where are the guy characters. The henchman that seemed like a guy turned out to be a girl. I just want some damn answers.

Not creepy at all…