Do you know what makes an anime great? There are a few things. You can have a great story, quality music, or even nice animation. However, something that the anime community truly latches onto would be voice actors. In this episode we got a real taste of quality voice acting.

Watch out for Ivy over here.

Well, Plutia is neither a pirated version of Neptune nor is she some random impostor. The girl is the legitimate goddess of Planeptune, but from another dimension. She was sent there in order to find someone from her dimension that escaped into Neptune’s. Although that is a very important task, Plutia does not seem to be up for the job. She appears to be like a low energy version of Neptune. She does make cute dolls though. The crazy stuff in this episode kicks off when IF is kidnapped and force-fed eggplants. I did not make that up. Neptune, Nepgear, and Plutia go to save her, but the eggplants get to Neptune and Plutia has yet to transform. Luckily, Plutia does transform, but there is a reason for her hesitation in this regard. Plutia undergoes an even more drastic personality change than Neptune when transformation occurs. Plutia becomes quite the sadistic fighter, but her strength was useful. She uses a sword that resembles Ivy’s from Soul Calibur. The day is won after their foe believes that using the power of eggplants would save her and it doesn’t. Oh yeah, and the mouse totally tried to get it on with Compa and failed when Plutia started kicking his ass.

I don’t even know what to say at this point.

I enjoyed this episode, but not for the reasons that I should have. I should enjoy a show for its story, but I didn’t feel that story really improved in this episode. We didn’t even get any nice parody stuff unless I missed something important. The Ivy sword was nice and all, but I am looking for more. If we don’t get parody or story, then I can definitely say that the fan service will not keep me on board. What I did enjoy was the addition of Kana Hanazawa. Why is that? Well, she is a damn good voice actress. I really liked both versions of her voice that are used for Plutia and having a familiar voice actor or actress is always a nice addition to a series. Especially for one that I am starting to lose interest in. Is this series doing anything completely wrong? I wouldn’t say that. I think that it still appeals to its target audience, but I am not a part of said audience. I want to enjoy this series, but I can’t guarantee consistency in this regard. 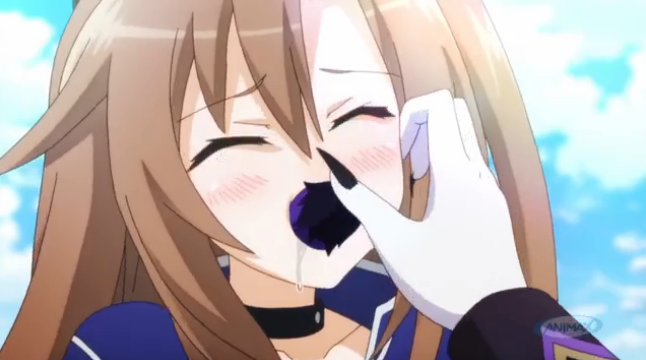 That was wrong on a lot of levels.

Here is the thing with this series. If the story is going to be lackluster, then I expect some serious comedy from a parody series. I don’t mean serious in the sense that this series has to be Fraiser, but I do mean that we need to see the parody aspect of the series used more often. That is what made this series appealing to me as I was watching the earlier episodes. Things like Super Retro Land, the Virtual Reality device from Vert, and the Lastation security hacking were very entertaining for someone like me. Can this series get by without it? Yes, because I believe that the target audience is fans that like to see cute girls doing cute things. I know people who watch stuff like that. Heck, I watch stuff like that from time to time. Some series that have cute girls doing things that cute girls don’t normally do are very entertaining. Girls Under Panzer is hilarious and serious at the same time. I really need to get on that because Bryan recommends it. Overall, I think that this series knows what its selling. I am just not buying it.