So all of the preconceptions that we’ve been gathering about Rin’s character have finally been put into perspective. This episode is simply ripe with those kind of character revelations. Perplexed by Rin’s sudden desire to enter to regional medley event, Rei feels that he’s entitled to know more about what happened the four childhood friends, and he has ever right to feel that way, too. After all, he’s the only one who’s really ever out of the loop, despite becoming an integral part of swimming team.

I also think it’s a interesting step for Rei’s character development. At first, he came across as a disinterested person who preferred to go about things his own way and by himself. But since joining the swimming team, he’s become more concerned about his new friends, particularly Haru, who has become somewhat of a role model for Rei.

However since the tournament, Rei’s noticed a change in Haru’s swimming form. While it’s become better on a technical level, it’s lost the beauty that Rei used to admire. This is really interesting, considering Rei used to be all about the technical side of sports and is now more concerned about the other side. After hearing about Rin’s past self, who was oddly much more happy and excitable, Rei takes it upon himself to confront him. I’m honestly not too sure what to expect out of this meeting. Perhaps Rei will try to extract Rin’s true motives out of him; motives that he himself may not even know that he has. 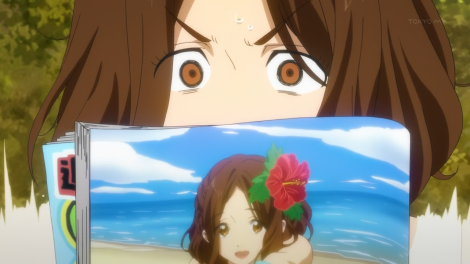 The other big reveal involves a certain Ama-chan-sensei, who happens to be a former swimsuit model. This kind of explains why Coach Sasabe recognized her, but it’s kind of creepy (well, more awkward more than anything). She has the perfect reaction to her cover being blown, too. KyoAni has quite the knack for making lovable side characters.