We all knew that this episode was going to come eventually. Yes, we were all waiting on the episode that talked about Hachiken getting Yoshino pregnant. WAIT!!!! I am not joking, but I did leave out a small detail. That was a rumor in the episode and this is really a story about Pork Bowl getting butchered. 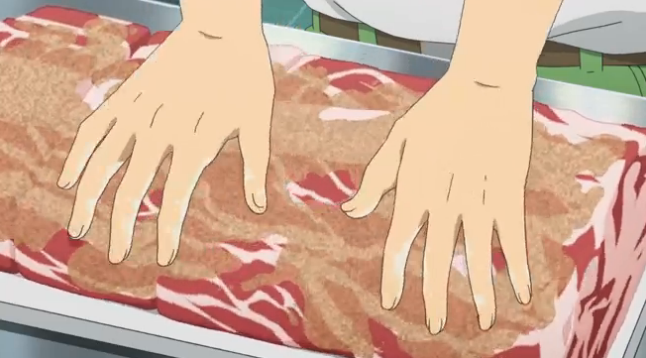 That is some tasty looking meat.

I was really looking forward to this one. The day has finally arrived and the pigs are getting sent to the slaughterhouse. Hachiken gripped with his decision and he found a solution that is beneficial in many ways. What did the young man do? He bought Pork Bowl. Not as a pet or anything like that. Hachiken bought all of the meat that the butchers got from Pork Bowl. It cost him a little over $250.00 for the fifty-one pounds of meat, but it seemed like a good decision to me. He used the money from his part-time job to buy the meat. Everything seemed to hit him in the face during the waiting period as well. The chemistry teacher explained the aging process, then they got to watch a video that showed off a slaughterhouse, and Hachiken got pressused by a lot of people regarding the meat in question. Hachiken decided to turn it into bacon with the help of Tamako’s relative. Hachiken thought that he was curing and smoking all of Pork Bowl, but Tamako saved the best cuts. Together with his friends and the teacher that refuses to put down the rice cooker, they enjoy gigantic pork bowls that looked so good I almost died of hunger.

That is pretty convenient.

I am in love with this series. What can make you feel really pressured about what to do with your meat? A teacher that runs around with fresh rice. In all seriousness, this was a very important episode. It showed off a level of maturity in Hachiken that people are noticing. Buying the meat from Pork Bowl did a lot of good things for Hachiken. This enabled him to get over his qualms regarding eating Pork Bowl and it eliminates any regrets he may have because he is in possession of all of his meat. As far as spending your money wisely, I think that Aki approves of this purchase. Using money that you earned through hard work to aid in your growth is pretty smart if you ask me. The entire process of handling the meat while preparing it for the smoker is a reflection of the care that Hachiken puts into his work. It is really admirable. Unfortunately, I was not a fan of the pork bowls that were eaten at the end of the episode. I am glad that Hachiken was able to eat the pig, but I really wanted his first bite to be of the bacon. That would have been the culmination of a great deal of hard work. 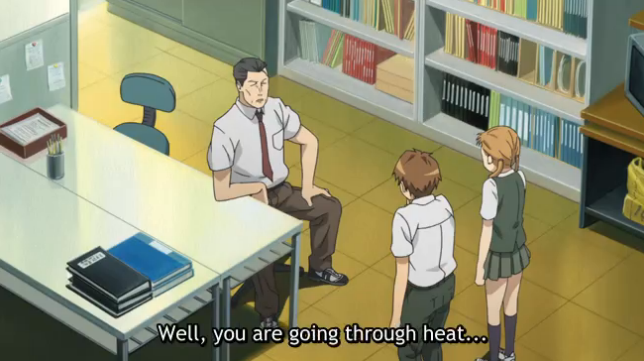 I could not stop laughing during this scene.

The serious nature of the episode definitely needed some balance. How do you force comedy into an episode about a man’s growth? Accuse two students of having sex on campus. That is right. Tokiwa overheard a conversation between Hachiken and Yoshino which started a rumor about the two having sex. That is not good for anyone. I thought it was funny how they made sure to show Aki’s reaction to the news even if it was brief. Yoshino may be my favorite character, but I do not need screen time for her so badly that I require her to start hooking up with the protagonist. I was fairly pleased though. It was a really funny thing and we did get more from Yoshino later. The girls had to punish Tokiwa for commenting on the weight of girls and she even made another appearance with some special cheese. I miss cheese. I am currently on a diet and I have cut out a lot of things. This series is killing me with all of the delicious food. Especially things like cheese. Overall, this is a very entertaining series. I just don’t know how they plan on closing out the season. We only have to wait until January for the second season, but that doesn’t mean that they can end this season awkwardly. 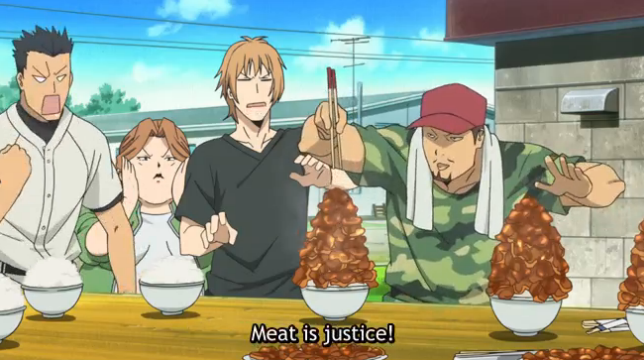 I will not argue with that.