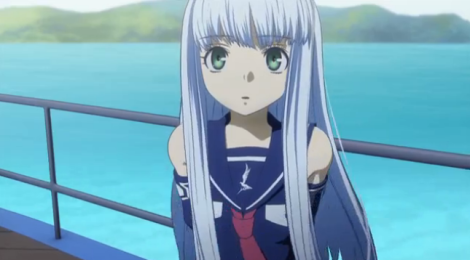 I have been looking forward to this one for a while. I will be honest. I didn’t really read up on a lot of these series going into our seasonal anime series draft. However, this one was my first round pick. Did it live up to my expectations? Let’s just say that SANZIGEN may have brought us an extremely unique sci-fi experience that I am glad to have on my list. 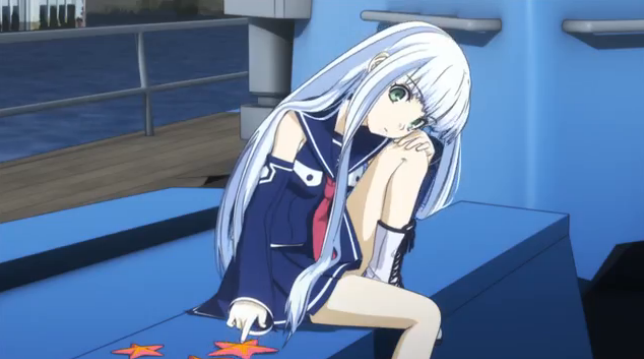 Well, let’s crack out the doomsday scenario binder and throw some stuff together because we are in another post apocalyptic anime. An advanced naval fleet known as the Fleet of Fog decided to strike against a world that was brought to the brink by global warming. The entire military strength of the United Nations was not enough to stop this naval force and things began to change in the world. All shipping routes were cut off and communications were severed. Travel by sea and all space technology became a thing of the past. Only terrestrial travel was possible. This forced the nations of the world into isolation. No one knew if things were fine outside of their borders. Of course, nations that could not self-sustain were doomed to failure. Seven years later a young man moved up the ranks at a naval academy. He, along with other future officers, got the chance to see a top secret item. A captured Fog submarine was in the possession of the Japanese military, but it would not activate. That was until our protagonist had a look at it. Out popped a young girl that claimed to be the personified form of the vessel. Along with this girl and a group of students from the academy, this group of traitors to both sides have decided to take on the Fog and give humanity a fighting chance.

Talk about a rag-tag bunch.

Although we saw quite a few important people, we only got to know two of the characters. Our main cast is made up of a group of kids that are piloting some pretty crazy technology. Does that sound familiar to anyone? I will say that the similarities to Gundam Seed stop here, but it definitely popped into my head.

Gunzou is the son of a famous military man. Even though the events of the war against the Fog were heavily classified, there is a rumor that his father defected to the Fog. This has put a heavy strain on Gunzou’s relationship with others, but he does have a few friends. Gunzou is the classic protagonist in a post apocalyptic world. He wants the power to change everything and he is oddly good at taking advantage of the right opportunities.

Iona is the personification of the submarine I-401. She seems to have a human body even though she is connected with this marvel of technology. As far as emotions go, she is the classic robotic character. She lives to follow the orders given out by Gunzou. Oddly enough, starfish flock to her and her presence messes with surrounding technology. That must have something to do with her origins.

I am assuming that we will get flashbacks that introduce the rest of the crew sometime soon. One thing that we do know is that they were members of the naval academy. As far as other character go, we did get to see some other personified ships and I am guessing that Gunzou’s dad will play an important role in the story.

I am not exactly sure how to feel about this series. I really enjoy sci-fi and I can tell that this anime is either ridiculously stupid or amazing. I just need to see more in order to make the right call. Oddly enough, that is always how I feel about a great series after episode one. I hope that I didn’t jinx it. Let’s go over some of the interesting things here. First is the CGI. People that read my articles should know that I am not the biggest fan of CGI. It mostly distracts from the normal animation and that throws me off. There are exceptions to this. I do believe that the use of CGI in Suisei no Gargantia is pretty good. When it comes to this series, I am fine with it. If the bulk of the series is done in CGI, then there isn’t a drastic change to worry about. Also, the animation style is starting to grow on me. Next we have the concept. I am actually a fan of this one. Losing to advanced technology is so overdone that it hurts. However, the forced isolation thing is a nice touch. I am on board with this one and I am anxious to see how things play out. I need to know the motive behind the actions taken by the Fog. 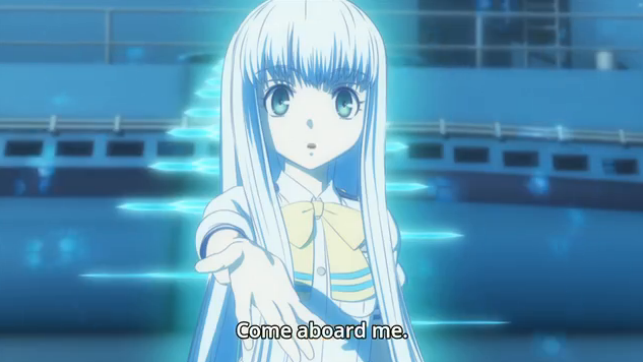 This better not be the end of the sexual innuendo.

Now we have some fun stuff to talk about. Is it sexist to make all of the ships women? Sailors always refer to ships as women, but I don’t know enough about this particular sexual stereotyping to know if people find it offensive. Even though the girls in this series appear to be made into classic anime roles, are they not strong characters? The are the personification of the most advanced technology on the planet. Oh well, someone else can tell me what’s up with that one. Next, let’s talk about what may be an inevitable romance between Gunzou and Iona. We have seen the relationship between man and not-quite-human girl countless times. Hei and Yin from Darker Than Black are a prime example of this. I don’t think that I have love on the brain by jumping to this conclusion. I see obvious sexual innuendo like that in the picture and automatically think that it will stay a thing. It doesn’t need to, but I think it will. Aside from that, I need to know about Gunzou’s father and the Fog. The guy has to be linked to the Fog if he sent a submarine for his son. Also, they insinuated that the Fog technology was not man-made. We may be dealing with aliens and I don’t know if that is too ridiculous or not. Could they be slowly choking us off in order to take over the planet once humanity has truly fallen? I don’t know about that one. This method takes away our natural resources and that makes our planet much less valuable. Oh well, I am excited for next week’s episode.

The quest to America begins.