This series no longer confuses me. I now know for sure that this is going to be a romantic comedy with a splash of legitimate story. Did it take me a little too long to come to that realization? Yes, but I wanted to hold my judgement until they decided to have Kojou check out Himeragi in underwear, a cheerleading outfit, and a short dress all in the same episode. That pretty much sealed the deal for me.

Kojou is not ready for this party.

How do you start off a good romantic comedy? Well, you have to let the protagonist walk in on his main love interest while she is in the middle of changing. Why was Himeragi in Kojou’s house as the perfect setup for that to happen? She was being fitted for a cheerleading costume. Himeragi and Yukina are going to cheer on the boys during a ball sports festival or something stupid like that. The guys begged her and Himeragi couldn’t refuse. Meanwhile, Kojou has been roped into playing badminton with Asagi during the event. Kojou should be good at most sports, but I am surprised they didn’t throw him onto the basketball team. Oh well, the practice was cut short by some pretty aggressive shikigami. They attacked Kojou and Himeragi had to take care of them. Kojou has the tendency to destroy everything around him. The shikigami left behind an invitation to a party from one a very important vampire a lord appointed by the First Primogenitor has decided to greet Kojou, but this party may be more than a simple meet and greet. 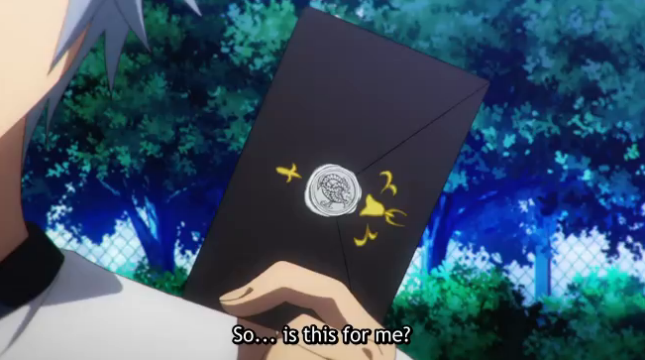 Kojou is a special kind of funny.

This is definitely a fun series to watch. I would like to see some of the night scenes become brighter, but that isn’t the worst thing in the world. It’s not like I am watching Blu-ray quality or anything like that. The ecchi stuff actually isn’t that bad. I know that they get a little sexual at times, but I would rather see two characters in some classic risqué behavior than a bunch of tentacles attacking anime girls. I can’t believe that I have to say that, but I am watching Yu-Sibu right now and they went past multiple lines drawn in the sand. I would say that I am curious to see how the romance in the series plays out, but it is pretty clear how things are going. Kojou and Himeragi will eventually end up together as their relationship grows through various fights and blood related moments. Asagi will be nothing more than an aid for Kojou as he requires her skills to complete the various missions that he has. If anyone else introduced to the picture, then I assume they are there simply to give Himeragi some competition even though it won’t matter in the long run. The romantic part of the series is pretty straightforward.

Either that “C-60” is a metric bra size or I am confused about the last part.

The new developments are quite interesting. The First Primogenitor seems to be pretty important as the master of seventy-two familiars and the key to ratifying the treaty or whatever that agreement is. I know that vampires can steal familiars with ease, but seventy-two is still a lot. Kojou has eleven right now if my lazy memory that refuses to look things up while writing holds up. I would like to know how Astarte still has her familiar, but the better question is in regards to her entrance into a legitimate organization. That is something that will probably not matter in the long run. When it comes to important things, Kojou seems even more important than he was before. If Primogenitors can appoint lords, then Kojou is seriously not taking advantage of his position. This will probably matter much less than the attack mage that is with the guy. She appears to be friends with Himeragi and I can only think that their relationship and the flow of the story will resemble that of one that I saw in Campione!. I honestly can’t see it going any other way and people who watched that series should know what I am talking about. If you haven’t watched Campione!, then I would recommend it to anyone that doesn’t mind being disappointed.

No change at all?

One response to “Impression – Strike the Blood, Episode 05”