The finale of my 4-part discussion and analysis of how WWII impacted Japanese pop culture and Miyazaki films. I hope you enjoyed reading these as much as I enjoyed writing these. Looking back at this almost three year old paper, I’m surprised at how intelligent I was back then. Good things don’t last forever, I suppose. Catch the introduction, Whisper of the Heart, and Howl’s Moving Castle, too! 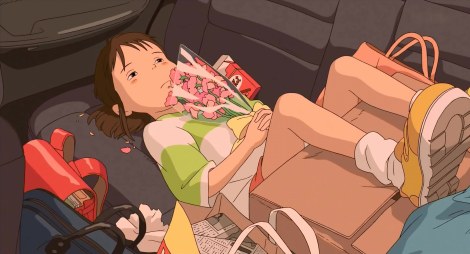 Miyazaki’s most well-known film in the states is the Academy Award-winning Spirited Away (Miyazaki, 2001), centering around a ten year-old girl named Chihiro who, along with her parents, stumble upon an abandoned amusement park. Night falls as her parents greedily indulge themselves in some food  mysteriously left out in a stand. Once the park comes to life with spirits, Chihiro discovers that her parents have been transformed into pigs due to their gluttony and meets a boy named Haku who offers to help restore her parents to their original forms. Major themes that occur throughout the film deal with the value of work ethic, importance of respecting nature, and restoration and redemption.

At the film’s opening, Chihiro is depicted as a spoiled, whiny child raised by rich and inattentive parents. However, after her parents are transformed into pigs, Chihiro is given the option of saving her parents, on the condition that she must beg for a job at the local bath house that caters to the spirits. At the bath house, there are a variety of strange spirit workers, ranging from frogs, men, women, and animated balls of soot. Although soot is generally perceived as useless residue that ends up polluting the environment, it is enchanted and put to work in the boiler room.[1] With these admittedly adorable creatures, Miyazaki suggests that everyone can be a contributing member of society, regardless of social class. This attention to the work ethic is reflective of Japan’s post-war industrialization when many jobs opportunities opened up in the larger cities, drawing in prospective workers from the rural country sides.

Chihiro’s first big job at the bath house is to prepare the bath for an enormous “Stink Spirit” who seems to be nothing more than a walking pile of filth. She douses the spirit with water prepared with the house’s best bath salts and discovers a “thorn” in his side. That “thorn” turns out to be the handle of a bicycle, and thanks to a group effort from all of the workers, the bicycle, along with a menagerie of other disgusting pollutants, is pulled out of the spirit. By removing the sludge, the workers are able to restore the spirit to its original form: a guardian of a nearby river. Miyazaki acknowledges that humans, through their constant desire for industrialization, have done irreversible damage to the environment and thereby creating our planet’s own “Stink Spirits.”[2] These monsters, created by human hands, can only be restored through a communal effort.

This idea of restoration plays a major role in Spirited Away. Chihiro, a young girl, finds herself cleaning up after the messes made by adults, sometimes even literally. The entire amusement park, abandoned after the suffering economy caused it to go bankrupt, is a symbol of the damages that human expansion practices can have on the environment. The riverbed surrounding the park is completely dried up, and Chihiro comments when she sees the deserted park, “Did you hear that building? It was moaning.” It takes a child’s intuition to realize that the forgotten landscape is almost like it’s in pain, while her parents remain oblivious.

The main impetus of Chihiro’s journey is her wanting to save her parents after they had been turned into pigs, the very manifestation of their true natures. She later musters up the courage to help bathe and purify the “Stink Spirit,” restoring him to the River Spirit he once was. At the resolution of the film, Chihiro is able to recall why the boy Haku seemed so familiar to her. She remembers that Haku is the spirit of the Kohaku river and that he actually saved her from almost drowning in the river. He had forgotten who he was because the river was filled in to make room for apartments. In a way, Chihiro is able to reverse the irreversible effects that human expansion and industrialization have had on the environment. 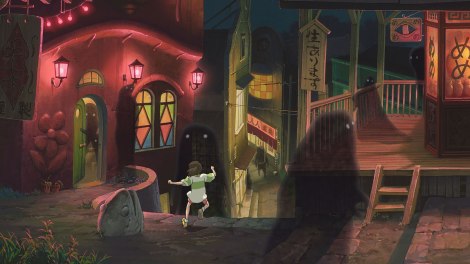 Nathalie op de Beeck says that “Spirited Away depicts the horror and tragedy of human progress, and the easy violence done to new generations of children who incorporate and perpetuate hostile economies.”[3] The themes that are presented in the film suggest that sometimes it’s necessary to go against the ideas that one was brought up on. Our young heroine transforms from immature and vulnerable to courageous and independent. She relies on her own values of self-worth and generosity, which proves to be of great benefit to all of the spirits that she meets. All of the main characters go through a philosophical maturation, with the only exceptions being Chihiro’s parents who are oblivious that they had ever been turned into pigs. This suggests that those who don’t recall their own past are doomed to repeat it.

This cyclical theme is emphasized by using the same shot of the family entering the tunnel at the beginning and exiting at the end of the film. The only being that has changed between the two shots is Chihiro. This transformation is made possible only through a trip to the spirit world and essentially a return to the past. The spirit world in the film very much represents the past, containing old-style bath houses complete with sliding doors and the typical gender roles: men as the hosts and the women as the cleaning and serving crew.[4] Even the mere existence of spirits is an indication of a return to traditional beliefs. The “gender inequality” of the workers in the bath house is an example of how although the past is never considered to be perfect, the experiences taken from events of the past can be used as a guide of how to act in the future.

Thoughts for the future:

World War II is the most important and influential event of the last century. The socio-economic and countercultural effects, ranging from loss of life to the resulting rapid industrialization, heavily impacted the people of Japan and the generations that would follow. Today, the memory of the war can still be found in all forms of media and pop culture. Even in the seemingly innocent children’s movies of Hayao Miyazaki there are many references to the impact that the war has had on humanity and how society is still being subconsciously affected by it. Miyazaki is a master at weaving these progressive themes into his beautifully animated movies, and perhaps even he, himself, is influenced by his own personal memory of the war.

More recently, the tsunami disaster in Japan that occurred in mid-March of 2011 is comparable to the horrific events of the war, throwing the country into a state of disarray, while simultaneously uniting it. It will be intriguing to see, as time progresses, how the memory of the tsunami disaster will influence, and be represented in, Japanese pop culture in the future. It’s quite possible that this event will have a large impact on the use of themes previously discussed such as national identity and environmentalism. By taking a look at how World War II has influenced the values that are presented in Japanese pop culture and the values that following generations of children are taught, we can better understand how the memory of events in a country’s history can shape the individuals who inhabit it.

One response to “Analysis – Following the Fallout: The Impact of World War II on ‘Spirited Away’”